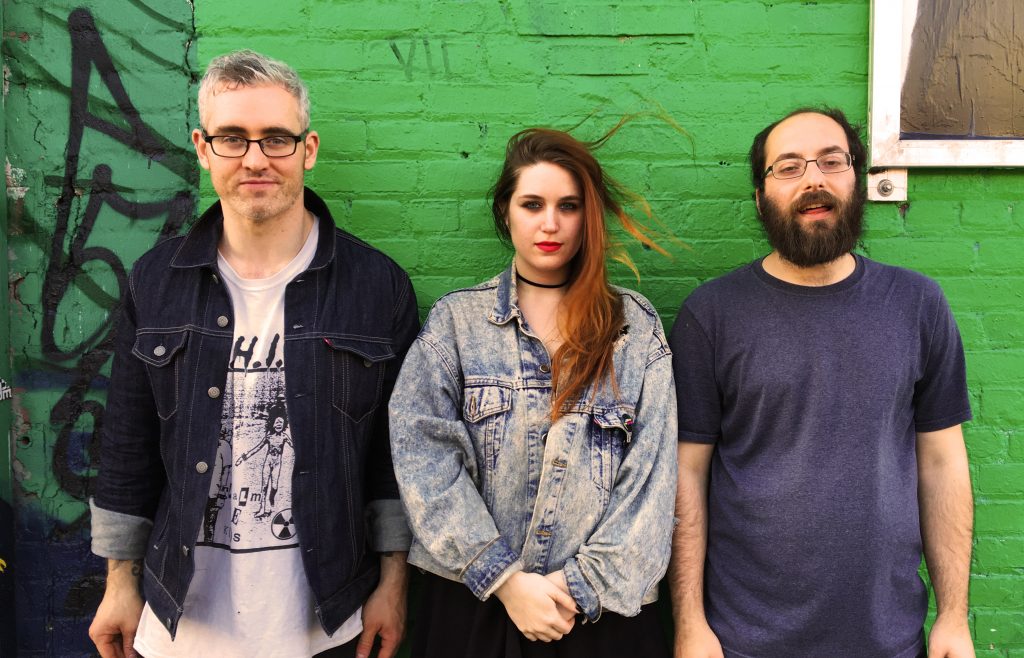 Due Out June 24th via Exploding In Sound Records

Jackal Onasis are excited to announce the upcoming release of their debut album, Big Deal Party. Due out June 24th via Exploding In Sound Records, the Brooklyn trio are sharing the premiere of the album’s lead single “The New Ron” today on Stereogum. Formed across coasts by Alex Molini (Stove, Big Putts, ex-Dirty Dishes) and Jordyn Blakely (Stove, ex-Butter The Children, ex-Night Manager), the duo shared files back and forth, constructing the basics of Big Deal Party before Molini uprooted to Brooklyn where the band became a “band” and were joined by Chris “Ghoul Man” Colli (Sick Head). While the members of Jackal Onasis come from a wide range of musical backgrounds, their shared love for bands like Deftones, Autolux, and My Bloody Valentine pulled them together, deriving the band’s heavy shoegaze and fuzzed out noise pop sound… that and their love of TV, specifically recent cult-favorite Party Down, the show the band’s name is derived from as well as the loose concept of the record.

Stereogum shared their thoughts about “The New Ron,” offering:

“On “The New Ron,” Blakely’s rolling, quick-hitting drum pattern punctuates Colli’s shoegazing, wandering bass and Molini’s wailing, alternating guitar patterns. The song is an unrelenting two minutes, but there is so much musicality and evolving rhythms that it never quite settles into one aesthetic, keeping the ear engaged. Blakely’s hypnotic monotone wafts slightly above the fray until it’s enveloped by an all-out jam session at the end with Molini’s guitar sounding like sirens whizzing through the streets. ”

Formed out of an unquenchable need to watch TV and with generally having nothing to do, guitarist Alex Molini (of Stove, Big Putts, ex-Dirty Dishes) and drummer Jordyn Blakey (Stove, ex-Butter the Children, ex-Night Manager) began Jackal Onasis back in 2014 by sending demos back and forth from Los Angeles to New York City. Through their mutual love of the same bands (Autolux, My Bloody Valentine, Deftones) and a steady stream of emails, the pair were able to form their fuzzy alt-rock sound over a year’s time without ever playing in the same room together. In 2015, Molini relocated to New York and Jackal were joined by bassist Chris “Ghoul Man” Colli (of Sick Head) and the newly formed trio began performing regularly in the Brooklyn area.

Now after a year of tinkering and playing out, the band is set to release their debut Big Deal Party on June 24th, 2016 through Brooklyn based label, Exploding in Sound Records. The 7-track release is comprised of songs all inspired by one of the group’s favorite TV shows, cult-classic Party Down (which also inspired the group’s name, Jackal Onasis). Recorded on both coasts between 2014 and 2015 by the band and various friends in numerous locations, the project was fully realized with the help of mix and mastering engineer (and fellow former Dirty Dishes member), Steve Bone.

“Runty Little Puppy” was included late last year on Post-Trash’s “Volume One” compilation with all proceeds directed to Planned Parenthood.

1. The Handsome Giraffe
2. You Should Listen To Your Nurse (No Sleep)
3. Big Deal Party
4. Runty Little Puppy
5. Mookie Told Me Everything
6. The New Ron
7. I Went To College (Procrastination)