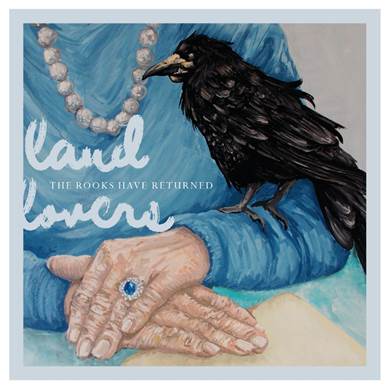 “Attests to the health of domestic independent music.”
4/5 – Metro

“Magnificent, haunting worlds of domestic wonder… A rare gem of a record”
The Times

Irish Shoegaze band Land Lovers are streaming their brand new album in full, The Rooks Have Returned, out 16th May on Popical Island. The album is premiering over on Songwriting Magazine now.

Founding members and key contributors to the Popical Island collective in Ireland (Paddy Hanna, Tieranniesaur, Squarehead, Ginnels, No Monster Club, etc.), Land Lovers are central to the ever-growing Dublin guitar pop scene in recent years. The band have also toured with and opened for the likes of Stephen Malkmus & The Jicks,Yuck, The Mantles, Nodzzz, Ham Sandwich and The Wave Pictures.

Album opener ‘Springtime for the Mystics’ lilts and sighs as it flirts with bombast, taking musical cues from Future Islands, New Order, the Bowie of Berlin and the things at hand, like a dubiously-tuned old grand piano and a MiniMoog.

‘Angeline’ is a jangly, ‘50s inspired anthem accompanied by shuffling drums, nodding to vintage northern indie. The song reminisces from the perspective of an older man, looking back on his youth and recalling ‘the one that got away’. Lead vocalist, Padraig Cooney, references memories from his own childhood – ‘Orwell’ and ‘The Trads’ were rival ‘gangs’ in the singer and guitarist’s hometown in Ireland. Cooney told PopMatters: “Angeline’ is rooted in our love for the time when rock ‘n roll got a bit sophisticated in the late ‘50s and early ‘60s. It’s a foot in the waters of Bobby Darin, Carole King and Joe Meek.

He adds: “It’s lyrically faithful to that time too, with its school setting, but as with many Land Lovers songs, we’ve tried to invest common tropes with something else: something sinister, or high minded or conceited or satirical. In this case, the complacent singer mistakes harmless teenage messing for dangerous gang activity and overestimates his own subsequent success in gaining a place in ‘the firmament’. However, we think it’s important not to deliver this kind of song with an eyebrow arched. It’s a sincere pop ballad.”

Having started life as the solo project of Padraig Cooney, releasing the album Romance Romance, Land Lovers became a 5-piece band for the Immovable Feet EP and theacclaimed Confidants LP. In the gap between that album and The Rooks Have Returned, the band collaborated with Limerick’s Choice Prize-nominated Windings on a split LP.