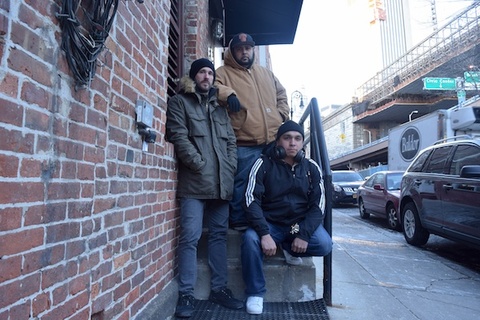 DÄLEK SHARE SOUNDSCAPES SOUND PACK, HEAR OUTTAKES FROM THE STUDIO SESSIONS THAT RESULTED IN THE NEW ALBUM ASPHALT FOR EDEN OUT NOW VIA PROFOUND LORE
Dälek, pioneers of abrasive and distorted hip hop, have teamed up with Swedish music hardware makers Elektron for theDälek Soundscapes Sound pack. The samples are results and outtakes of the late night studio sessions giving birth to their geniously intense seventh album Asphalt for Eden.
Broken, melodic, beautiful: this is a brutally honest testament of both the creative process and aural aesthetics of the grinding machine known to man as Dälek.
LISTEN TO DÄLEK SOUNDSCAPES SOUND PACK
Dälek also recently took part in a Headphone highlights for Red Bull Radio, so to find out what their most played tracks are, head on over to the website to check it out: http://www.rbmaradio.com/shows/headphone-highlights/episodes/dalek
Dälek’s new LP Asphalt For Eden (their first full-length album since 2009) is out now via Profound Lore – for promo, interview and any other queries regarding the album or sound pack, please do not hesitate to get in touch (lauren@rarelyunable.com). Finally, tour dates are currently being booked, stay tuned for more news incoming soon…

ASPHALT FOR EDEN TRACKLISTING
1. Shattered
2. Guaranteed Struggle
3. Masked Laughter (Nothing’s Left)
4. Critical
5. 6dB
6. Control
7. It Just Is
“Dälek are both brilliant and unique.” – BUZZ MAGAZINE
“Hip hop noise archfiends chop-shop a Trump-felling Americancruiser of uncivil alliterative growling. Bug-heavy bass and slow-rolling illbient hiss.” – MOJO
“Dälek’s take on hip-hop is foreboding and hypnotic in a way that feels unexpected; sure, in the Age of Future, creepy, dark vibes are almost de rigeur, but Dälek takes it a step further towards the abyss by incorporating a seething electronic edge—think Einstürzende Neubauten, not Soundcloud… Their sound is so complex and quixotic that the group has also found itself sharing stages with the disparate, experimental likes of KRS One, Tomahawk, The Melvins, TOOL, Grandmaster Flash, Jesu, Dillinger Escape Plan, Mastodon, and Earth. On Asphalt for Eden, harsh EBM and biting electronic beats mesh bizarrely well with long, winding sheets of shoegaze (see the glorious ethereal swell of “Masked Laughter (Nothing’s Left)”), trills of trip-hop, and MC Dälek’s purposeful, enunciated rhymes.” – NOISEY
“Asphalt For Eden is no less vitriolic, menacing or visionary than before. A swelling mass of synths and effects-laden guitars build awe-inspiring, monumental walls of sound through which the beats and rhymes dance a tune riling against the ills of this world. Politics, religion, social injustice and violence aren’t safe from the razor-sharp tongue of Mr Brooks; eschewing the swagger and cockiness plaguing many who try to make their (often all-too self-serving) voices heard, it is his intelligence and wit that drives these diatribes we should all be taking note of.” – THE MUSIC FIX
www.facebook.com/dalekmusic
deadverse.com
www.profoundlorerecords.com
www.facebook.com/profoundlorerecords