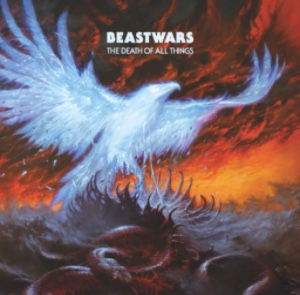 Praise for Beastwars’ The Death Of All Things:

“Beastwars have been regarded as one of metal’s best kept secrets, and if there’s any justice in the world their latest opus should help the New Zealand bruisers shrug off their ‘plucky contenders’ label and take their place among the heavyweights.”
Metal Hammer

“The last raging sermon from the mount of dark and destructive rock ’n’ roll.”
Noisey

“This four-piece are as good as any band operating within their chosen genre to date […] and you’re left with the impression that Beastwars hurled everything they have at this album. It’ll either be the release that truly breaks the band or the record that sets them free.”
The Quietus

“The Death Of All Things is a rock album get-behindable. It works as hardcore driving music, while also being moody, touchy, and definitely under the influence. As they say: ‘Obey The Riff.'”
MetalSucks

“Hyde, and the band, have never sounded so tortured or fucking angry at the world […] The hardships Beastwars faced have been transformed into artistic strengths, seeing the band boldly push past genre restrictions and incorporate far more influences from outside of metal.”
Invisible Oranges

The Death Of All Things is available now through Destroy Records – www.obeytheriff.com