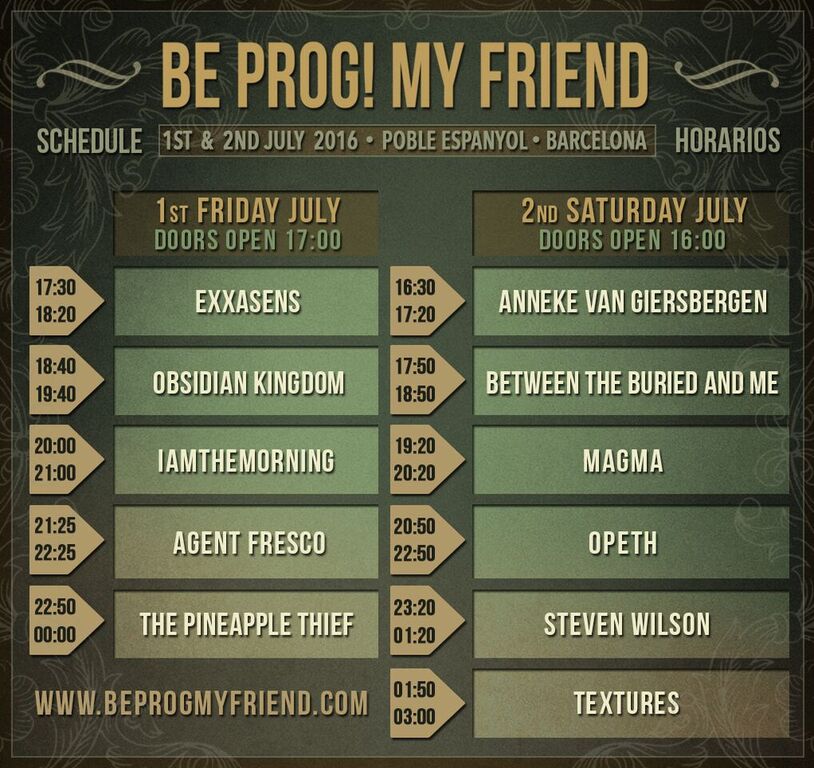 Barcelona based festival Be Prog! My Friend have revealed the stage times for this year’s event.

Sponsored by Metal Hammer and Prog Magazine, 2016 will see Be Prog! My Friend co-headlined by Steven Wilson and fellow progressive heavy weights Opeth.

Friday 1st July Is a free entry show only for those who have purchased tickets for the Saturday. This will also now take place at Poble Espanyol having been moved from the Sala Apolo concert hall to meet demand. The line-up features Steven Wilson’s label mates The Pineapple Thief who will be joined by the highly rated Icelandic band Agent Fresco and Barcelona’s very own Obsidian Kingdom and Exxasens as well as the recently added iamthemorning.

Since its inception in 2014 the Barcelona based festival Be Prog! My Friend has played host to the likes of Anathema, Devin Townsend, TesseracT, Camel, Meshuggah, Katatonia, Riverside, Isahn and Alcest.

Taking place in the beautiful open air surroundings of Poble Espanyol the site is one of the most important landmarks of tourism in Barcelona. By day the Catalonian hotspot is an architectural museum and on the first weekend of July it will play host to some of the world’s finest progressive bands.