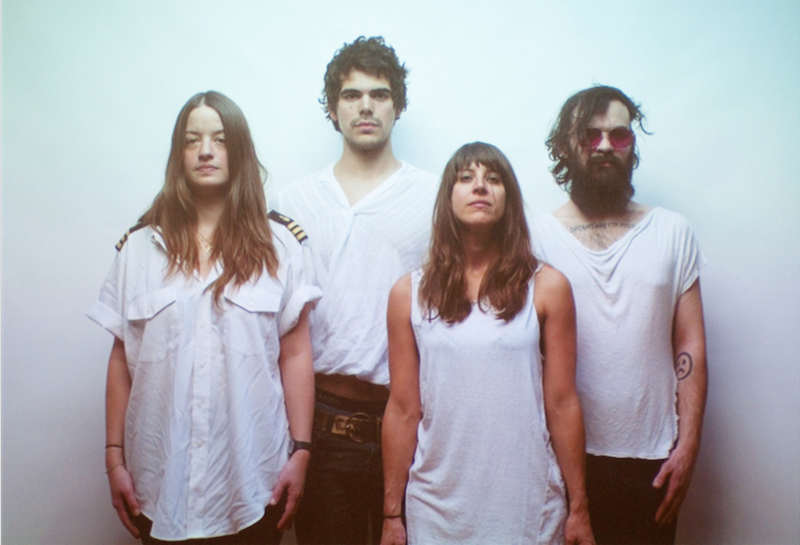 Touched By Ghoul share first track from forthcoming debut
Sybris singer/guitarist Angela Mullenhour leads Chicago noisy rock group.
“Mullenhour’s vocals rise to heated roars worthy of stardom, which lend themselves perfectly to Touched by Ghoul’s brand of rock that is loud and heavy…” — Gaper’s Block
Chicago quartet Touched By Ghoul share the first track from their forthcoming debut album today via Echoes & Dust. The song “Immaculate Consumption” is available to hear and share HERE.
A video teaser featuring music and artwork from the band’s full length Murder Circus, is available tow atch and share via YouTube.
Raised in a basement and surviving only on sheer will and flamin’ hot cheetos, Touched by Ghoulclawed their way to the surface to induce the vomit of your soul. Touched By Ghoul exists in their own post-nostalgic now, rock and roll gravediggers tearing right through their dissonant yet beautiful Earth. Helmed by Angela Mullenhour (Sybris, Coins) along with a broody bunch of rock and roll ruffians of the Chicago scuzz scene, Touched By Ghoul constructs a soundtrack that is equally at home at a dive bar or a séance.
On their debut LP coming out on new Chicago imprint Under Road Records, Mullenhour hollers her way through a filthy, living, breathing, kidnapping, dead body finding love story backed by Paige Sandlin’s animal drums kicking through the fog and fury of guitar wars. Recorded by Bill Skibbe(The Kills, Blonde Redhead, The Dead Weather) at the legendary Key Club Recording Company, the Ghouls have found that Eternity is today and blood in the sand is just mud.
Sounds like: If Stephen King wrote an episode of Columbo scored by the bastard children of The Birthday Party, Babes In Toyland and Echo and the Bunnymen.
Murder Circus will be available on LP, CD and download on April 15th, 2016 via Under Road Records. Pre-orders are available via Bandcamp.
Touched By Ghoul is:
Angela Mullenhour-Vocals/Guitar
Andrea Bauer-Guitar
Alex Shumard-Bass
Paige Sandlin- Drums
TOUCHED BY GHOUL LIVE:
04/18 Chicago, IL @ Empty Bottle