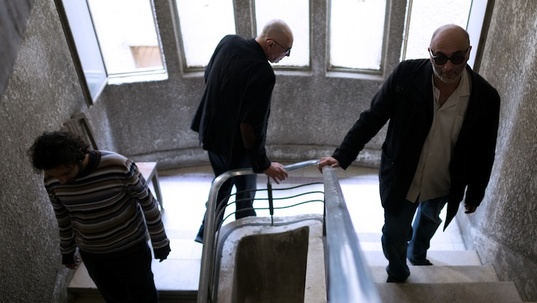 Following many a late night jam session, the band recorded hours of material during a three-day studio run in April 2014. After compiling and mixing the album in Montreal’s Break Glass studio in July 2015, the refined result will be released as a double-album titled Bes via Nawa Recordings (NAWA005) on 2xLP, 2xCD and DL.

Named after the Ancient Egyptian dwarf deity who was worshiped as the defender of all things good and enemy of all that is bad, Bes captures the trio on a hypnotic yet unpredictable journey. From the the lilt of four-minute ethiopian tinged Resinance to the 30-minute free-form epic Museum of Stranglers, the album skirts the outer limits of a psychedelic soundtrack to a North African road trip.

Bes by The Dwarfs of East Agouza will be available on double CD, double black & limited edition coloured 12” vinyl LP and download, including Mastered for iTunes and lossless high-definition 24-bit/96kHz audio files.