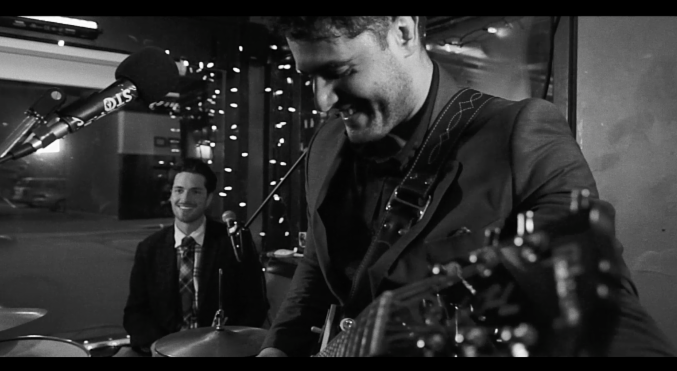 Music for pint drinking, it was a visceral, deodorant-demanding show.” — Exclaim!
“The hottest kind of rock.” — PopMatters
Windsor, Ontario’s The Blue Stones are streaming their entire forthcoming album, Black Holesstarting today via AllMusic.com. Hear and share The Blue Stones’ Black Holes HERE.
Paste Magazine recently shared the shimmering, laid-back yearning of album closer “Magic”, available to hear and share HERE. Exclaim! shared the title track HERE. Previously, PopMatters launched “The Hard Part,” a perfect example of the duo’s hypnotic, yet rousing heavy soul-rock sound.
Black Holes was co-produced with Canadian underground legend Ian Blurton and mixed by Detroit garage-punk stalwart Jim Diamond (The White Stripes, The Von Bondies, The Dirtbombs).
The Blue Stones were a little surprised to see that their 2012 release How’s That Sound? was on Bandcamp’s best-selling list. At the same time, it was more of a revelation as to how far they’d come: the alternative indie-blues duo had made a serious impression on everyone they’d come across since hitting the road in 2010.
Not having a third member to fill another rhythm role, the duo developed an original characteristic to the sounds of the bands that influenced them. “We never had a bass player in our early jams, so we subconsciously compensated for one in the music,” says guitarist/vocalist Tarek Jafar.
For Black Holes, Jafar and drummer Justin Tessier worked closely with Canadian underground legend Ian Blurton to define the record’s sound and emotion. “Ian brought a level of grit and rawness that we really wanted to tap into for a record that’s far darker than what we’ve released in the past,” says Tessier. “We also worked closely with Brett Humber (Sound Foundry Studios), who helped us with How’s That Sound? in 2012.”
The duo’s music has also been featured numerous times on major network television, including spots on Parks & Recreation, Suits, Monday Night Football, Battle Creek and more.
More importantly, crowds across Canada and hometown-neighboring Detroit, MI have been stunned by the energy and force behind their loud, dominant live performances-especially for just two dapper guys. The Blue Stones create a killer hi/lo effect; contrasting their slick and put together look with their rough and rollicking live show.  Heart, soul and sweat characterize every Blue Stones spectacle – you can’t help but be pulled in from the moment the first note is played.
The two are elated to have played with premiere acts and in national festivals; however, they’d like to achieve an even greater reach to bigger audiences around all of North America and the world. “After two releases and a third in the works, we’re looking to forward to pushing this as far as it’ll go, to reach as many people as we can,” says Jafar. “We love this too much to keep it hid in southwestern Ontario.”
Black Holes will be available via iTunes and Bandcamp on April 15th, 2016.