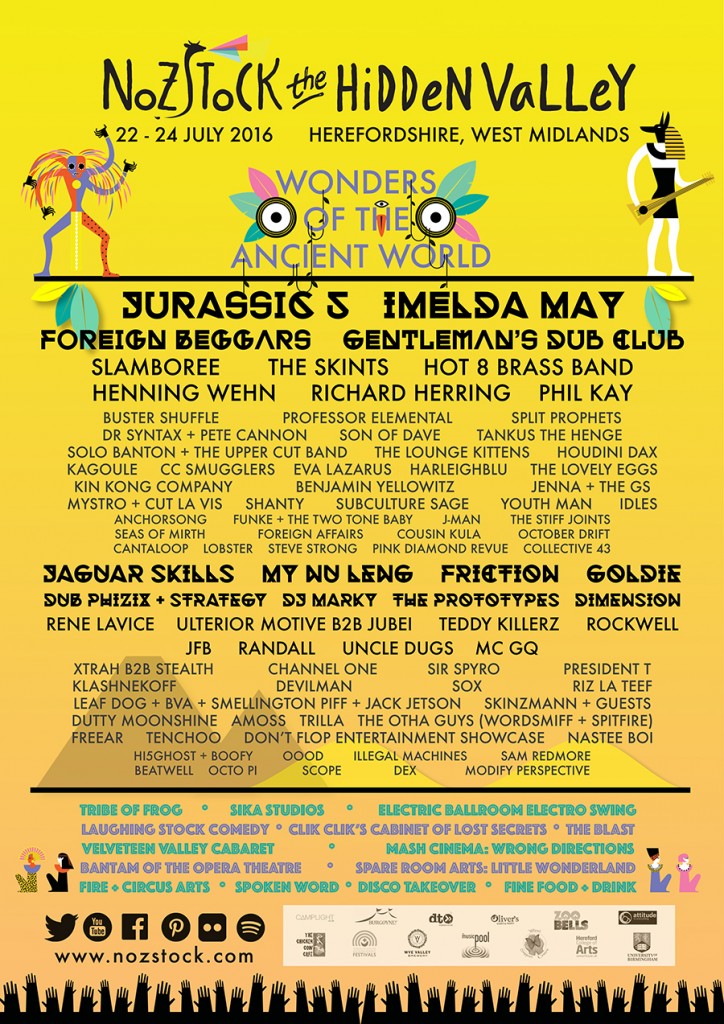 Nozstock have announced their second wave of acts, as the enchanting magical odyssey returns for its 18th year, set on a beautiful working farm in Herefordshire’s rolling hills.

With its first round of artists already released, including Jurassic 5, Gentleman’s Dub Club and Foreign Beggars, now the festival introduces more acts taking over Bromyard in July.

The feisty Imelda May has a truly unique vocal talent, inspired by the sounds of jazz infused with rockabilly. The rise and rise of Imelda has been unstoppable since the release of her first studio album Love Tattoo in 2009. The Number 1 Mayhem followed in 2012 and Tribal in 2014. Imelda and her band have been touring non-stop around the world; she is a stellar performer who makes her Nozstock debut headlining on Sunday, bringing the festival to a rousing climax. Touching down in the Hidden Valley, the festival welcomes the almighty ska-reggae powerhouse, The Skints. The guys have been fusing reggae, ska, grime and hip hop since 2007 to create an incomparable sound and bring a wild dynamic to Nozstock.

Honing his craft for the last 20 years, Jaguar Skills has kept a mysterious edge to his character with details of his real name, age and home town left largely unconfirmed. He has been responsible for some of the most exciting musical projects of the past few years, centered around producing stunning mixes which have festivals and clubs partying to his genre-crossing sounds. Known as “the King of Jungle”, Goldie is an artist whose creativity knows no bounds. He was a graffiti and album cover artist before he started performing; from a MBE to over 20 years as a Metalheadz lynch-pin, Goldie is one of the UK’s most celebrated music artists and a cultural icon revered for his productions and DJing. From their adopted home of Bristol, where early reggae, drum ‘n’ bass and dubstep pioneers from Massive Attack to Portishead were informing their cultural history, My Nu Leng understand the heritage and importance of bass music in the city. The celebrated duo are known for their blistering sets and dark, smouldering vibes, heavy on mood but always danceable.

Many more live acts have been announced for Nozstock. Buster Shuffle effortlessly fuse Cockney ska/pop and lyrics that are guaranteed to make you laugh, with songs about crafty cats and messy divorces. The Lounge Kittens are a cheeky, glamorous and geeky trio, spanning rock, punk, ska, pop, soul, metal, dance and grunge to sublime party-time effect. Also at the party is the Mercury-nominated King Kong Company. The Irish dance band have performed alongside the likes of Orbital and Paul Oakenfold; their sound can be likened to the brass section and heavy bass of Dreadzone mixed with the hypnotic rhythm of the Chemical Brothers. Benjamin Yellowitz is a young singer songwriter who takes acoustic roots to new levels, influenced by RnB and the darker side of pop. Subculture Sage bring pure hip-hop vibes to Nozstock, as party-starters of the finest pedigree and the old skool DJ with vibes for miles, Uncle Dugs makes a welcome return to The Cubicles. Further new live acts announced include Idles, Anchorsong, Funke and The Two Tone Baby, J-Man, Seas of Mirth, Foreign Affairs, Cousin Kula, Lobster, Adam Scriven, Mr Tea and The Minions, Junior Bill, Black Thistles, Black Salvadore and Cherryshoes.

Nozstock’s original dance arena is a former bull pen and milking parlour, and Sika Studios are returning to host. The UK’s top underground hip-hop, grime, rave, graffiti and clothing family are making a very welcome return, with an epic assembly of talent descending on Bromyard including Klashnekoff, Devilman and a RLD Records showcase. Friday sees The Blast return to Nozstock, with their multi genre sounds. Their line up includes President T, Sir Spyro and Nastee Boi. Psytrance stalwarts Tribe of Frog have also announced their headliners; OOOD and Illegal Machines whilst in The Swinging Gardens of Babylon electro swing heavyweight Dutty Moonshine will be taking up headline duties.

Over in Laughing Stock, the self-styled Henning Wehn is the German comedy ambassador to the U.K., a hilarious TV and radio regular who skewers the British way of life with aplomb. The teutonic comedian blends self-mockery and nationalistic superiority to great effect. He’s joined by the outlandish and eccentric Phil Kay, who has become something of a Nozstock regular and the man described by British Theatre Guide as the “leading hidden master of modern British comedy” Richard Herring. Returning after last year’s extravaganza, Mash Cinema present a host of cultural videos and ancient references featuring The Power In Our Hands, The Jungle Book, Nosferatu, Nanook Of The North, Hydro The Film, London Calling: Shorts, Nothing Can Turn Into A Void, Sell Off – The Abolition Of Your NHS and The Adventures Of Prince Ahmed.

Set on a beautiful working farm in the heart of Herefordshire, the reassuringly welcoming and independent event has evolved from 50 friends at the inaugural gathering and flourished into an intimate musical odyssey. Joining the dots between pop, ska, folk, funk, soul, indie, drum and bass, psytrance and a whole lot more, plus interactive adventures for big and small kids of all ages, Nozstock is a playground for everyone, from seasoned festival goers to newbies setting out for their first time. This year’s theme is Wonders of the Ancient World. Nozstock embraces a whole family festival experience from beginning to end, and the Children’s space is a friendly, welcoming environment for both parents and little ones alike.

THE MELVINS SHARE “TAKE ME OUT TO THE BALL GAME” COVER