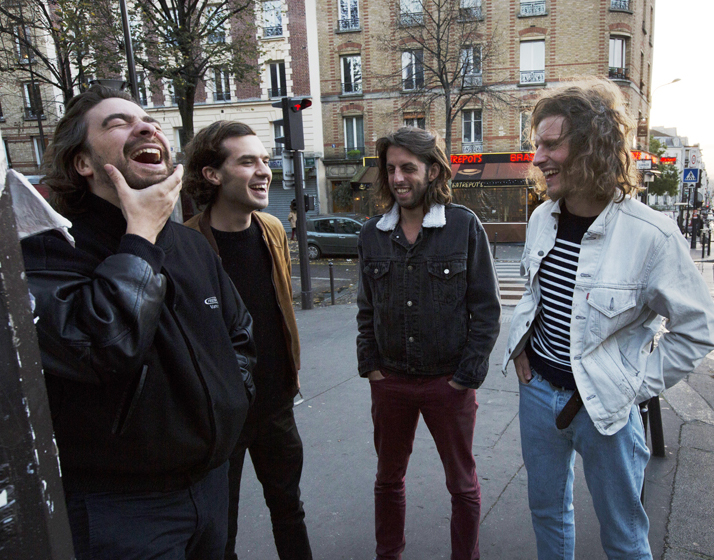 The colourful world of Nat Jenkins is a story that can’t be told in one sitting, but before we even start to meander in to that world, here’s the important stuff… Nat Jenkins & The Heartcaves will officially release their new album ‘Back To The Island’ in the UK in April 2016 (through French label Mirador).

Originally hailing from London, Nat Jenkins and long-time collaborator Robbie Heart moved from London to Paris in late-2013, where they met The Heartcaves, a French rhythm section pairing of Pierre Juarez and Stephane Chandelier, and British keyboardist Johnny Manning.

Before relocating to France, Nat’s bands have featured a glamorous array of British talent, including Dan Smith of Bastille, Ben Lovett of Mumford and Sons, Sam Doyle of The Maccabees, Natalia Tena of Molotov Jukebox, Freddie Cowen of The Vaccines, and Luke Pritchard of the Kooks. While other notable collaborators have included Rolling Stones producer Chris Kimsey and Clash guitarist Mick Jones, and Nat even performed and sang with The Animals on their most recent UK tour.

Crossing the French-English divide for his new record, the aptly titled ‘Back To The Island’ is a nostalgic mix of sublime vocal harmonies, cascading keyboard lines, infectious guitar hooks and wonderfully imaginative rhythms. Drawing on the best of British and French musical heritage, the album manages to be both raw and gritty, yet sweet and slick in it’s delivery.

Following two years of heavy touring across the continent, the band have built themselves a sizeable reputation as a live act, and following their huge show with The Kooks at The Forum in London in December, 2016 will also see the 5-piece back on the road for shows with La Femme and Molotov Jukebox, as well as their own headline tour.

Apart from his musical offerings, Nat has also published a novel – Now Here This – accompanied by a collection of poems and song lyrics. A series of short films written by Nat, entitled One Two, are also shortly set for release, featuring, amongst others, Games of Thrones actress Natalia Tena, La Femme singer Marlon Magnee and The Kooks’s Luke Pritchard. While the recent British gangster film –The Rise of the Krays – released in cinemas this October also features two original songs by Nat.

Nat Jenkins & The Heartcaves new album ‘Back to the Island’ will be released in the UK on April 1st 2016 through Mirador. The album was recorded in Paris at Tango Zulu studios and is co-produced by Swann and Henry Blanc Francard and mixed by Swann.