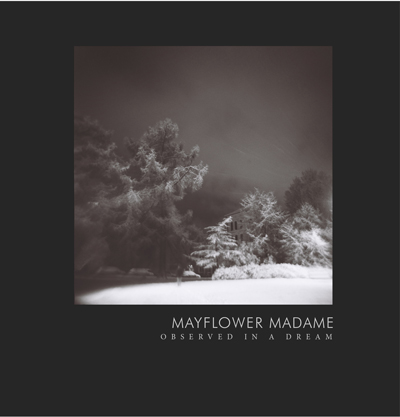 MAYFLOWER MADAME
DEBUT ALBUM ‘OBSERVED IN A DREAM’ OUT ON 22 APRIL 2016 ON NIGHT CULT RECORDS/CUSTOM MADE MUSIC
HEAR NEW TRACK ‘SELF-SEER’
“Deeply atmospheric psychedelia, the band’s music exists in a haze, a smoke-laden fug. Recalling Spacemen 3 or aspects of The Velvet Underground, the band’s lysergic drag seems to colour all it touches.” Clash
“Mayflower Madame‘s sound has been compared to My Bloody Valentine, Spacemen 3 and The Jesus & Mary Chain. Which might seem a little obvious. But actually only tells part of the story. Throw in a few post-punk references too. We’re thinking Bauhaus, The Chameleons and The Sisters Of Mercy, and the melting pot of influences that makes up their sound is more or less complete.” Drowned in Sound

“Taking cues from the Jesus and Mary Chain and other unsmiling acts they have removed all colours from their music, sticking to black, white and grey.” Here Comes The Flood

“Think early Black Rebel Motorcycle Club and also their obvious shared influences of the darker tone of music that cut a swathe through the eighties like Echo and The Bunnymen, The Jesus and Mary Chain and Bauhaus” Glasswerk

Norwegian band Mayflower Madame release their debut album ‘Observed in a Dream’ on 22nd April via their own label Night Cult Records in Europe and Custom Made Music in North America.
The cold Oslo winters have influenced their distinctive blend of post-punk, shoegaze and psychedelia, gaining them comparisons to the likes of Bauhaus, The Jesus & Mary Chain and Spacemen 3.
The last track the band share before their debut album is released, ‘Self-Seer’ is partly inspired by the art of their fellow countryman Edvard Munch. A dark and feverish tale about obsession, escapism and longing, you can hear it here:
Since releasing their debut ‘Into the Haze’ EP in 2013, Mayflower Madame have been invited to play at two of the biggest festivals in Norway (Norwegian Wood and Oyafestivalen) and have supported some of the most prominent bands in the flourishing ‘neo-psychedelic movement’ such as Night Beats, Crystal Stilts, Disappears, Moon Duo, Crocodiles and La Femme.
Available on CD, vinyl and to download, ‘Observed In A Dream’ conveys a shadowy and tumultuous world, sometimes ecstatic and noisy, but always indulging the soothing charms of melody. Thematically, the album is about endings and the fluctuating, passing states of relationships and life itself. From the smouldering serenity of ‘Confusion Hill’ through the feverish ‘Lovesick’ and the vivid ‘Weightless’ to the closing ‘Forever / The End of Everything’, the album reveals different stages of a partly subconscious journey and its accompanying feelings of obsession, anxiety, instability and longing.
Mayflower Madame are Trond Fagernes (vocals/guitars), Rune Overby (guitars), Petter Marberg (bass) and Ola J. Kyrkjeeide (drums). Additional live and studio member: Kenneth Eknes (synth).
www.facebook.com/mayflowermadame
www.instagram.com/mayflowermadame