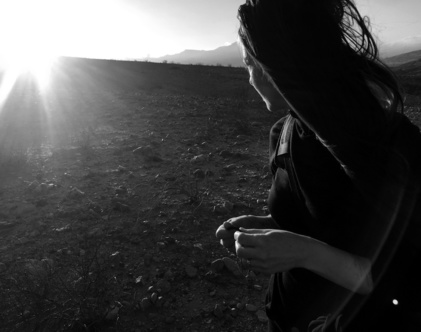 MAMIFFER ARE STREAMING THEIR NEW LP THE WORLD UNSEEN IN FULL AHEAD OF RELEASE THIS FRIDAY; US TOUR DATES CONTINUE
Mamiffer shall release their dynamic and compelling new LP, The World Unseen this week via SIGE Records. FACT are streaming the record in full ahead of release.
LISTEN TO THE WORLD UNSEEN BY MAMIFFER
Don’t forget you can still watch Daniel Menche’s video for ‘Parthenogenesis’

For Mamiffer, music is a divine language, a code to be deciphered, a map riddled with clues. The World Unseen is a conceptual and liminal document of numinous connection through an experience with loss. It is an exploration of subconscious and psychic bonds between the past and present, and the ways in which the musical devices of repetition and incantation create hands across the chasm that divide the human from the divine.
Through the use of piano, voice, guitar, Wurlitzer organ, bass synthesizer, tape machines, and effects pedals, Coloccia and Turner have created an eight-song aural lexicon that vacillates between Arvo Pärt’s delicate minimalist beauty, Thomas Köner’s narcotic pulses of noise, and Richard Pinhas’ sublime textural patterns. Further expanding upon their explorations, Mamiffer enlisted Eyvind Kang for string arrangements. Geneviève Beaulieu (Menace Ruine) and Joe Preston (Thrones) make guest appearances on ‘Domestication of the Ewe pt. III’, contributing additional choral vocals and bass, and adding greater dimension to their auditory crossings. Despite this impressive arsenal of musicians and instruments, Mamiffer ultimately depends as much on empty space as they do upon the various oscillating frequencies within their sound. “The record is imperfect,” says Coloccia. “It has within its heart an incompleteness, a stillness containing the presence of absence and loss.”

The World Unseen sees the light of day April 1, 2016 on CD, 2xLP, and digital formats via SIGE Records in the U.S. (pre-order it here) and as a CD with a bonus disc on Daymare Records in Japan.

The World Unseen Track Listing:
1. By the Light of My Body
2. Flower of the Field II
3. 13 Burning Stars
4. Mara
5. Domestication of the Ewe – part I
6. Domestication of the Ewe – part II
7. Domestication of the Ewe – part III
8. Parthenogenesis
MAMIFFER US TOUR DATES
March 29  Columbia, MO @ Club Berlin
March 30  St. Louis, MO @ Foam
March 31  Knoxville, TN @ Big Ears Festival
April 1  Cincinnati, OH @ Northside Yacht Club
April 2  Chicago, IL @ Co-Prosperity Sphere
April 3  Milwaukee, WI @ Cactus Club
April 4  Minneapolis, MN @ Icehouse
April 5-9  Iowa City, IA @ Mission Creek Festival
“A new album of chillingly beautiful soundscapes….deeply satisfying.” – FACT
“An opus of expansive, undulating tonal drone and slow- burning, piano-driven elegance, it’s intensely – almost laughably – beautiful in parts, teetering on the edge of widescreen mood-worship without ever slipping over… It’s too early to deem it a classic, of course, but the spare, sequential reveal of fresh texture and melody on each listen makes The World Unseen a wholly affective – and deeply satisfying – sonic experience.” – CRACK
“The uniqueness of Coloccia’s visions is conveyed primarily through her words… Coloccia’s work is wider than any single focus could represent. And it achieves its beauty by burrowing through places where darkness and light are both indispensable.” – THE WIRE
“Together they create their hauntingly intriguing sound, which blends the lights and darks of instrumentals paired with melancholic vocals.” -MXDWN
Artwork and Design
SIGE Records
Mamiffer
Barnett+Coloccia
Mára