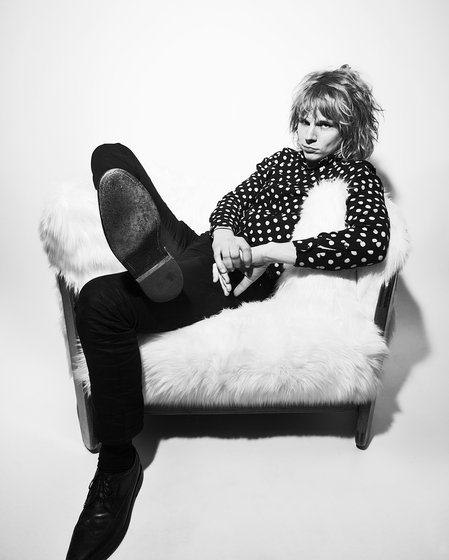 KYLE CRAFT
Shares “Eye of a Hurricane”
from new album Dolls of Highland
due out on Sub Pop on 29th April
You can now listen to Kyle Craft’s “Eye of a Hurricane,” a standout from Dolls of Highland, his forthcoming Sub Pop debut. American Songwriter says of the track:““Eye of a Hurricane” starts Dolls.. with a sudden jolt of energy, courtesy of the song’s ragtime piano lick. The keys continue to drive the track, as the distorted guitar works to add a sense of eeriness to the song. All the while, Craft displays the full prowess of his vocal range, hitting high notes that hark back to glam rock vocals of the ’70s.”
Rolling Stone also included Kyle Craft in its “10 New Artists You Need To Know” feature, and had this to say of his music: “A swamp bar jukebox loaded with British glitter and Seventies Southern rock; a crawfish boil aboard ELO’s spacecraft.”
Kyle Craft will release Dolls of Highland on CD / LP / DL / CASS worldwide April 29th through Sub Pop. The twelve track album features the singles “Lady of the Ark,” the aforementioned “Eye of a Hurricane,” “Pentecost,” and “Future Midcity Massacre.”
Dolls of Highland was written, recorded and produced by Craft, mixed by Brandon Summers and Benjamin Weikel of The Helio Sequence at the Old Jantzen Building in Portland, and mastered by Greg Calbi at Sterling Sound.
Dolls of Highland is available for preorder from Sub Pop Mega Mart, iTunes, Amazon,Google Play, and Bandcamp. LP preorders from megamart.subpop.com will receive the Loser edition on  pink vinyl with black swirl.
What people have said about Kyle Craft:
“Craft admits his voice sounds a good deal like Bob Dylan’s, and that his muse has come to him many, many times. Still, “Lady of the Ark” hints that Craft’s music is so full of its own weird singularity that he’s on to something far beyond idol worship.” -Billboard

““Pentecost” sees Kyle Craft…return to his hometown in Louisiana, haunted by the ghost of a friend who took his own life. Paired with his knack for great melodies, it demonstrates Craft’s emotional power as a songwriter.” [“Pentecost” / “All Songs Considered”] – NPR Music

“With inviting, yet imperfect vocals and a jangly guitar melody, “Lady of the Ark” is a sweeping goodbye to a long-term relationship. It’s somehow warm, melodic, and rough at the same time.” [The Weeks Best Tracks”] – FLOOD

Like many artists from the South, Craft has a conflicted relationship with the region’s cultural duality, a topic he tackles on “Lady Of The Ark.” Shrouded in guitars and organ, he caustically wails, “Swing low, low sweet heathen / Swing for the wretch and the rock and roll kid,” a line he says he wrote in response to the “shame, shame thing that ‘church folk’ tend to do so often,” and which doesn’t sit well with Craft. “Roam this earth repeat it / All this sin until this wicked world makes sense in time,” he defiantly growls near the song’s end. Craft’s roaming days may be done for now, but “Lady Of The Ark” shows his music as wild-eyed and restless” – [“Lady of the Ark” / “Songs We Love”] –  NPR Music

“It’s thrilling. It’s the sort of music that can only come from a somewhat unique musical outlook, a track that instantly sounds like nobody other than Kyle Craft. The huge sound of pounding drums, the almost mariachi handclaps, the frankly bizarre fairground-organ interlude, the lyrics than hint at a complex incestuous web of lives and lies, and all that before you even get to the voice…he has said that listening to Bob Dylan inspired him to embrace his voice and make the most of it. Kyle has suggested he shares a tone with Bob, but to our ears it’s more like the love child of Withered Hand and Neutral Milk Hotel’s Jeff Mangum, and that’s a very good, if slightly divisive, place to be.” – For The Rabbits

“Hard to believe given the innate sense of pop heritage that blossoms from every ounce of his fruitful, endearingly scorched lead vocal but it wasn’t until Craft stumbled upon a David Bowie that he began to take an interest in music. Lucky for us that he did – debut track ‘Lady Of The Ark’ is a stormy, rugged gem, led by one of the most distinctly impressive new voices in the game. A mighty fine introduction.” – Gold Flake Paint