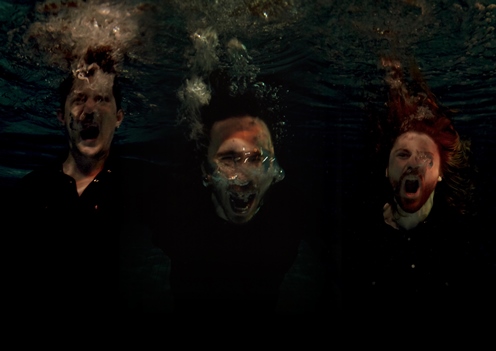 GHOLD SHARE THE FIRST TRACK FROM THEIR NEW LP PYR
EUROPEAN TOURS WITH PALEHORSE AND BONGRIPPER APPROACHING
The eleven minute opening salvo from Ghold‘s third full length PYR can be heard playing at the Quietus, ahead of the album’s release date on the 6th May, on Ritual Productions. The track, ‘Collusion With Traitors’, shows Ghold detonating from the get go with a bruising march, clenching in percussive contractions and surging forward in exponentially heavier iterations – a fine example of their refined sound present across this riveting record. Listen to the track at the link below, and catch them performing across Europe in the coming months on tour with double-bass deviants Palehorse and the ruthless, methodically heavy Bongripper – all dates below.
LISTEN TO ‘COLLUSION WITH TRAITORS’
The new record, PYR, is towering with a sonic thickness, frantic dizzying energy and shattering immediacy, penetrated by despondent howls and an uncompromising slice of remorselessness. Yet even the seasoned Ghold fans will find something new here, as collaborative noises and instruments creep into their sound.
On their third album, they have elevated their tectonic tonality to a level of innate expertise, with an evident sincerity that cannot be learned. Encased in a heavy exoskeleton, these compositions are at their heart achieving the special form of beauty that can only be conveyed by some special artists working in the medium of loud music, and their wide palette and strong instrumental bonds are the result of a fearless approach, drawing inspiration directly from themselves and their surroundings.
Influencing the four track album was the band’s previous dwellings, Pyrford House, Brixton (London). At the time of recording it was undergoing vast changes, multiple evictions and imminent demolition. The site no longer exists but the music that was created there shall bellow forward and beyond.