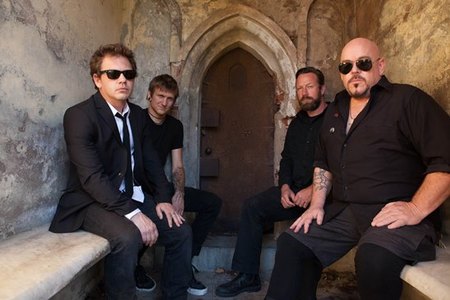 DARK PUNKS ALARIC PREMIERE ‘MIRRORS’ FROM THEIR NEW LP ON NEUROT RECORDINGS
End Of Mirrors is the forthcoming full length from Oakland-based dark punk conjurors Alaric. Set for global release on May 6th on CD, vinyl, and digitally via Neurot Recordings, and on cassette via Sentient Ruin Laboratories.  The record, captured and mixed by Skot Brown at Kempton House Studios, provides an emotional and deeply physical journey through inky, blackened sonic murk, devoid of all hope. Oppressive, gloomy, and epically grandiose, each of the seven psalms comprising End Of Mirrors is at once beautiful and unsettling, and as a precursor to its release, you can now hear the track ‘Mirrors’ at the link below…
DELVE DEEP IN TO ‘MIRRORS’
LISTEN TO THE PREVIOUSLY SHARED TRACK ‘ANGELS’ AND PREORDER END OF MIRRORS HERE.
Alaric – featuring within its ranks current and former members Of Dead And Gone, Pins Of Light, Noothgrush, Hedersleben and UK Subs – began their voyage in 2008 with an eye toward creating moody and compelling music unlike any other. Beginning with influences from such progenitors as Killing Joke and Christian Death to the darkest, heaviest punk and psychedelia, the band has dedicated itself to creating a singularly shadowy electric guitar-driven music. Alaric’s previous releases include a debut singleAnimal/Shadow Of Life (FYBS/ Buried In Hell Records, 2010), a self-titled LP (20 Buck Spin, 2011) and a split 12” LP, with Atriarch (20 Buck Spin, 2012). Alaric, who recently opened for Neurosis on one of their three special thirtieth anniversary shows in San Francisco earlier this month, completed a full European tour with Cross Stitched Eyes last Fall and are currently plotting live shows in support of End Of Mirrors.

END OF MIRRORS TRACK LISTING:
1. Demon
2. Wreckage
3. Mirror
4. Adore
5. Shrinking World
6. End Of Mirrors
7. Angel
“…a deathrock opera that brilliantly sews together the dusky emotivity of Bauhaus and Christian Death, the punishing and bleak atmospheres of Killing Joke and of the heaviest punk bands, and the desolate and hopeless atmospheres of the most crippling doom.” – CVLT NATION
www.facebook.com/Alaric
www.neurotrecordings.com
www.facebook.com/neurotrecordings
www.twitter.com/OfficialNeurot
www.sentientruin.com
www.facebook.com/SentientRuin