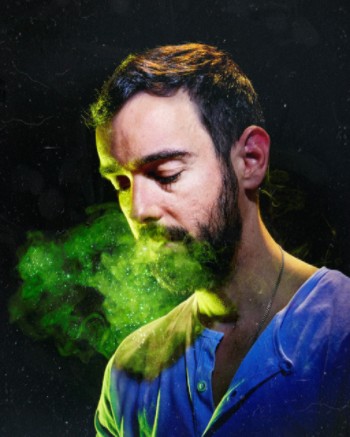 “Bates has been revisiting his passion for musical discovery, trying out new instruments and sounds with abandon.” STEREOGUM

When asked about the song Jonathan said: “Its helplessly returning to a vice (whether it be a person or substance) that you know for a fact will destroy you. A shuffle over a march. Kimbras character and mine having a verbal back and forth over gluttony.”

The track is taken from new album Trágame Tierra, set for release on April 22nd. With Trágame Tierra – his sophomore album under the moniker – Jonathan Bates has created a multi-layered collection of songs that continue to build on Big Black Delta’s already explosive electronics by adding more icy Scandinavian-leaning beats, near-country acoustic warmth, and more live instrumentation. The record also features “RCVR,” a masterful collaboration between Bates and Debbie Gibson as well as many other guests.

Bates, who is occasionally found playing guitar and singing with the likes of Brandon Flowers, Brian Wilson, Britt Daniel, Dhani Harrison and more, will be embarking on an extensive U.S. tour in support of the release – which kicks off on April 25th in Las Vegas and features stops in NYC, Chicago, Philadelphia, Boston, Seattle, D.C and his hometown of Los Angeles.

Trágame Tierra was funded via PledgeMusic. Leading up to the release, those who order at PledgeMusic will receive an ‘access pass’ to all kinds of exclusive merchandise and updates, including videos, pictures, and clips of new music. For all things Big Black Delta, please visit BigBlackDelta.com.