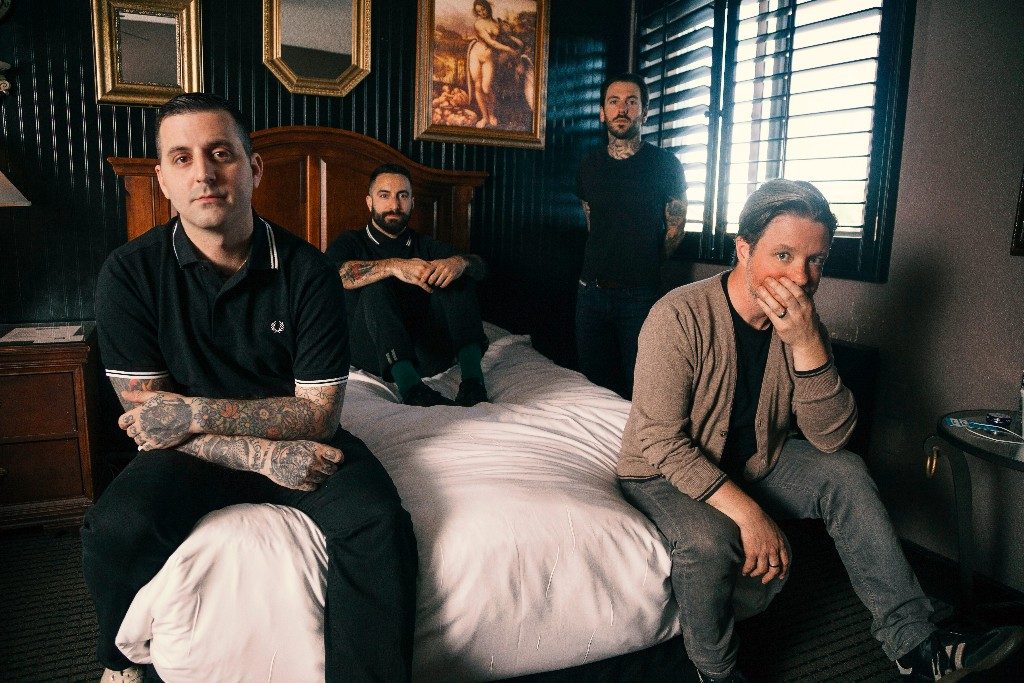 Bayside, the NYC-based rock band whose most recent album, ‘Cult’, debuted in the Top 25 on Billboard’s Album Chart, return with their seventh album, ‘Vacancy’, on Aug. 19 via Hopeless Records. Pre-orders are available now via http://smarturl.it/BaysidePreorder.  A North American tour kicks off on Aug. 11.

Where Bayside’s last album, ‘Cult’, dealt with singer/guitar player Anthony Raneri’s move to Nashville, his recent marriage and impending fatherhood, ‘Vacancy’ tells the story of the dissolution of his marriage and finding himself alone in the city that was meant to be his new home.  “The hotel on the album cover reflects the feelings I had while working on ‘Vacancy’,” explains Raneri.  “Writing this album, I felt as if everything was uncertain, I could move back to New York, buy a house in Nashville… I just didn’t know what was going to come next. I felt very isolated and as if everything in my life was temporary at that moment.”

In the two plus years since the release of ‘Cult’, not only had Raneri moved to Nashville, but guitar player Jack O’Shea also made his way to Music City, while drummer Chris Guglielmo moved to Orange County, Calif. leaving only bass player Nick Ghanbarian in New York. For the first time in the band’s sixteen-year history, they worked on music remotely, trading demos via email. A difficult process, the geographical hurdles forced them to take a new approaching to writing and recording, with the band electing to live together during their five-week Nashville recording session.   “It definitely changed the process,” said Raneri.  “Ironically, even with the new constraints, we created our most complex and highly ambitious record.”

Tim O’Heir (Sebadoh, Say Anything) handled production for ‘Vacancy,’ a perfect match for the band whose affinity for musicals has been an influence on their often-idiosyncratic song structure. “There’s always been a tinge of show tunes in Bayside’s music,” adds Raneri. “Our music has always been whimsical, it’s never followed the verse, chorus, bridge format – we often have several key changes and odd time structures; lots of things you only really hear in musicals and where in the past we’d have a pop guy help us reel that in, Tim, who was nominated for a TONY for Hedwig and the Angry Inch, was someone who got the weird shit we do and has an affinity for the dramatic, whimsical side of the band.”

Bayside embark on a North American tour surrounding the album’s release, with the dates launching on Aug. 11 in Ft. Lauderdale.  The Menzingers and Sorority Noise support. “We’re as always, going to be mixing in a good amount of the new record with all the old songs that everyone loves to sing a long to,”said Raneri. Tickets are available now via www.baysidebayside.com.