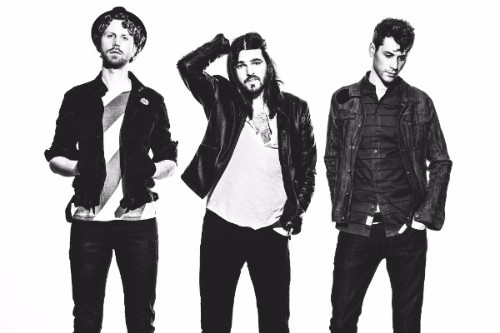 Attica Riots have released the colourful video for their debut single ‘Misery’. The fluorescent neon spectacle recently premiered with leading US music magazineRelix.

‘Misery’ pulsates with the elated fuzz of nostalgic synths and a danceable indie-swagger, with a healthy dose of garage-rock buzzing around Attica Riots’ free-spirited edges.

This single is the first to be taken from the Canadian trio’s upcoming debut albumLove Sunshine & Hysteria out later this year through Five Seven, which has been produced by Mark Needham (Fleetwood Mac, The Killers, Imagine Dragons).

Attica Riots bring a twisted rejuvenation of classic indie-rock sentiments and revitalise them into a fulfilling new sound. The Winnipeg-based trio comprises two brothers – Anders and Kyle Erickson, on drums and guitar – alongside frontman Bobby Desjarlais.