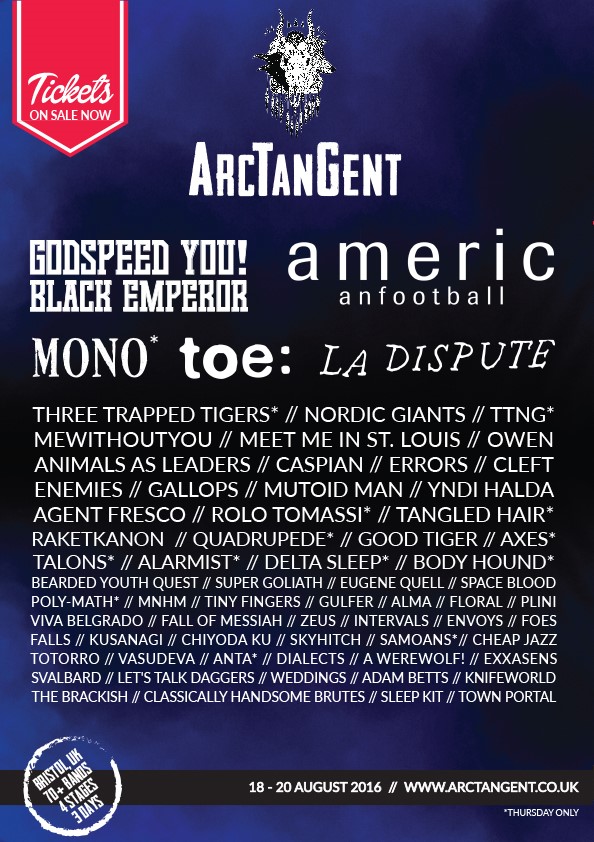 The 4th year of ArcTanGent Festival will see mewithoutYou, Cleft, Gallops and Enemies join the already announced Godspeed You! Black Emperor, American Football, MONO, Toe, La Dispute, Three Trapped Tigers and Meet Me in St. Louis. Organiser James Scarlett says “this announcement feels like the icing on the cake to what was already going to be a very special year for ATG. Cleft’s final ever gig, Gallops reforming and the phenomenal mewithoutYou – it’s fair to say we’re very excited. And it would seem that the ticket buying public agree because we’ve already sold more than 70% of our tickets, which is a record for us at this time of year”. Tickets are on sale now from www.arctangent.co.uk/tickets.

Mark Huckridge of Gallops says “After 3 years loitering in the corridors of the vanilla prefab that is life in the 21st century, Gallops have returned. We’ve tried desperately to exorcise the MIDI-synced demons in our skulls via mundane tasks and hobbyist ritual. We’ve burned all of our equipment more than once. But none of this worked. We head into an East Midlands studio next month to begin recording our second LP. We will be performing our first UK festival appearance at Arctangent on Saturday 20th August.”

John Simm of Cleft added “ATG is like family. We couldn’t be more excited to be killing off this stupid band at the festival this year, and we’ll have a special few nuggets of fun for anyone that turns up to see us and our special friends.”