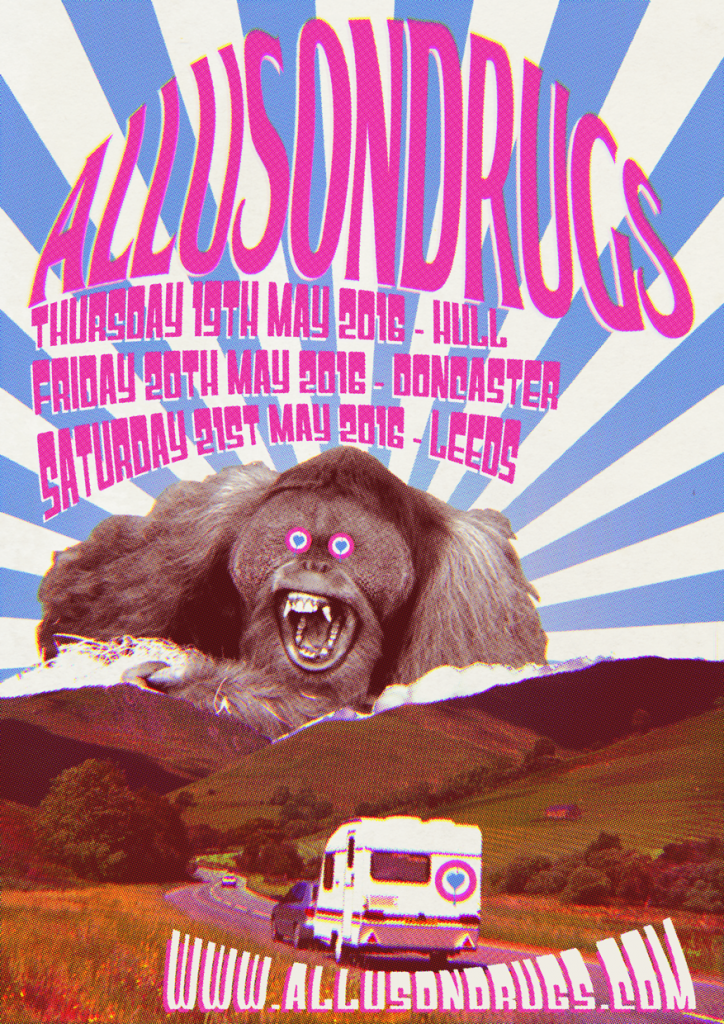 Yorkshire’s finest purveyors of whacked-out sounds Allusondrugs have today revealed a 100% live in the studio with no overdubs performance video for their track ‘Handicapped’, recorded in March 2016.

Shot by the band’s long-time visual collaborator and mate Giannis Kipreos and edited by guitarist Drey Pavlovic, it’s a full throttle peek at their visceral live sound on this ripping fan favourite that swells with Arabic-influenced melodies and psychedelic riffs.

Aside from playing a free stripped back set this Saturday 16th April in the afternoon at Jumbo Records in Leeds as part of the shop’s Record Store Day celebrations, the band have a small handful of local-ish shows announced for May 2016 – details below.

Commenting on their in-store performance and RSD, guitarist Damian Hughes says: “Jumbo has always been, and will continue to be, an important part of the music scene in Leeds. They stocked our early releases, sold our gig tickets and just helped us out like they do for loads of small bands in and around Leeds.”

“Some people are complete strangers to independent record stores. They might have never set foot in one, it might never have occurred to them that there would be a lot of great music there for them to discover; they might not even know that such a place exists. For some people going to an in-store gig of a band that they like might be their first ever experience of an independent record shop and the start of a great journey through all the great music they’ll find there.”

The band are currently writing and demoing new material, having just finished a successful stint on the ScuzzTV UK Throwdown tour alongside Max Raptorand Press To Meco.

You can catch Allusondrugs live at: