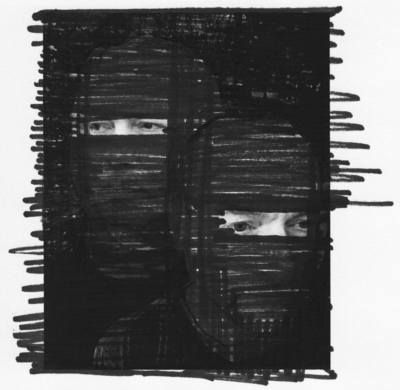 THE POISONED GLASS SHARE THE VIDEO FOR ‘TOIL AND TROUBLE’;
FROM THEIR NEW ALBUM 10 SWORDS ON RITUAL PRODUCTIONS;
TOUR DATES APPROACHING, INCLUDING ROUGH TRADE ALBUM PLAYBACK
The duo of Stuart Dahlquist and Edgy59, under the banner of The Poisoned Glass, have released the video for ‘Toil And Trouble‘ ahead of the launch of their debut album 10 SWORDS on April 22nd via Ritual Productions.
Disquieting yet enticing, sirens ring constantly and lethargic bass looms and smothers…but Edgy59’s jarring tenor holds you in place and
forces an internal reckoning. The video uses footage of a performance of the work of Bauhaus artist and choreographer Oskar Schlemmer – the surreal and alarming costume design and faceless dancers mesh with The Poisoned Glass’ aesthetic, and the video should leave its mark on your retinas for a while after.
WATCH THE POISONED GLASS’ ‘TOIL AND TROUBLE’
On 10 SWORDS, wide steps of ringing drones link and linger, finding slow, supple harmonious instances, and masochistic examples of the opposite, over which Edgy narrates eloquent batches of lamentation. Sometimes isolating and windswept, often immediate and agonizing, the interplay between his impassioned vocals and burgeoning electronics is a key identifier in The Poisoned Glass sound, while Dahlquist’s bass surges intermittently across the record, devastating when cranked up to full power. Pick scrapes sound off like the claustrophobic clamour of jungle animals on ‘Eels’, while elsewhere and over and over again, frequencies pulse in tandem with an unidentified score, leaving the listener suspended, for minutes on end. ‘Verbatim’ surrounds its explosion of a centre piece with an almost sarcastically reverent chant, and ‘Silent Vigil’ finds them at their most structured and consequently, at their most unsettling.
10 SWORDS utilises infinite textures and crawling pace to create a manipulative, negatively influencing flow of sound that is suffocating, suggestive, and sinister to the point of genuine fear – in other words, a huge and affecting achievement from the pair.
Along with the previously announced UK and EU tour dates, The Poisoned Glass shall be at Rough Trade West on April 30th to sit in on an album playback and signing session, free to attend, and with all details here on the Rough Trade site. Please find details regarding all other live dates below…
LIVE SHOWS:
11/04/2016, US, Seattle – Substation *new addition*
14/04/2016 Netherlands, Tilburg – 013/Green Room/Roadburn Festival
15/04/2016 Belgium, Brussels – Magasin4
16/04/2016 Germany, Osnabrueck – Bastard Club
17/04/2016 Czech Republic, Prague, Chapeau Rouge
20/04/2016 Norway, Oslo – Blitz
21/04/2016 Finland, Helsinki – Kuudes Linja
24/04/2016 Netherlands, Amsterdam – OCCII
27/04/2016 France, Paris – La Mécanique Ondulatoire
28/04/2016 UK, Bristol – The Exchange
29/04/2016 UK, London – The Black Heart /Desertfest London
ALBUM PLAYBACK/SIGNING SESSION:
30/04/2016 UK, London – Rough Trade West