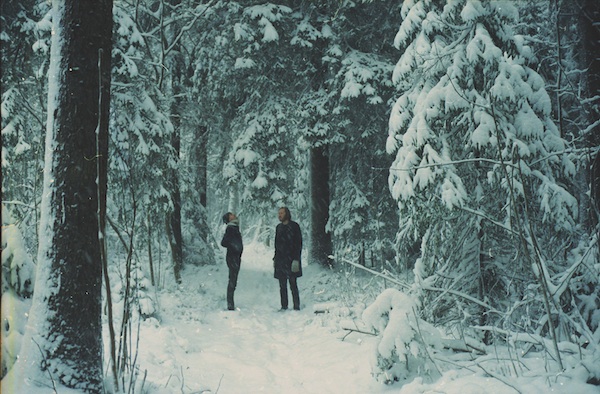 ‘Lulin’ is a joint creation of electronic duo Gidge, film production company Lampray and arts platform Norr – all friends from school in Umeå, Sweden. Usually, a film comes with a soundtrack and an album comes with music videos, but Gidge and Lampray wanted to make something different: a project where film and music are separated, yet strongly connected.

Following on from their 2014 debut record ‘Autumn Bells’, which racked up over a million combined listens via Soundcloud and saw a slew of praise from he likes of Thump/Vice, Pigeons and Planes, XLR8R, Gold Flake Paint, Earmilk and many more, Ludvig Stolterman and Jonathan Nilsson aka Gidge, return with a two-track LP and film largely influenced by the scenic surroundings of their home near the Scandinavian forest of Umeå. The idea behind the ‘Lulin’ project started six years ago with a noise on the roof and subtle creaking in the walls. It was an autumn night, and Ludvig was currently living alone in the old bakers cabin on his mother’s farm. The strange noises frightened him, but he was all alone and simply had to deal with it. If you see or hear something that is unexplainable, and you have no one there to share it with – what do you do? This slowly grew into an idea, and a mystical being called ‘Lulin’.

This resulted in a 24-minute film & 42 minutes of audio. The film revolves around a man (played by Victor Lindgren) who sees something he cannot explain at the edge of the woods surrounding his cabin. The audio is two 20+ minute tracks by Gidge with music derived from Lulin’s lonely world and mind.

‘Lulin’ is filmed close to Umeå, and more specifically, right where Gidge recorded most of the sounds of their debut album ‘Autumn Bells’. The film is written, directed and edited by Ludvig Stolterman (Gidge), cinematography and production by Martin Gärdemalm (Lampray), lighting and further production by Linus Andersson (Lampray), sound recording by Jonatan Nilsson (Gidge), sound editing by Johannes Oscarsson.

Made up of two atmospheric 20+ minute compositions, ‘Lulin’ is out March 18th on the 12″ vinyl format. The film is available digitally and comes as a HQ download together with the vinyl by Atomnation. Gidge is pleased to reveal the new debut screening of the ‘Lulin’ short film and full album stream below-

Credits: Written, directed and edited by Ludvig Stolterman (Gidge). Cinematography and production by Martin Gärdemalm (Lampray). Lighting and further production by Linus Andersson (Lampray). Sound recording by Jonatan Nilsson (Gidge). Sound editing by Johannes Oscarsson. Everything else was done by help of their close friends.

Quotes from the filmmaker about ‘Lulin’.

Lampray is a small film production company based in the north of Sweden. Perhaps most known for the short film Kung Fury, which they produced together with their friends at Laser Unicorns. Though not their first successful short film it’s definitely the most renowned, currently officially ranked as the most popular short film in the world.

Quote on Lulin, by Martin:

“With ”Lulin” we’re going back to one of our oldest idéas that over time has grown into a bit of mythology, for lack of better words. We’ve been playing with many different stories over the years but decided to start with an extremely minimalistic one that’s largely influenced by the actual environment in which it plays out.

A place that happens to be around the forests where me and Ludvig made our very first films with a shaky video camera. So it’s really going back to the roots this time!”