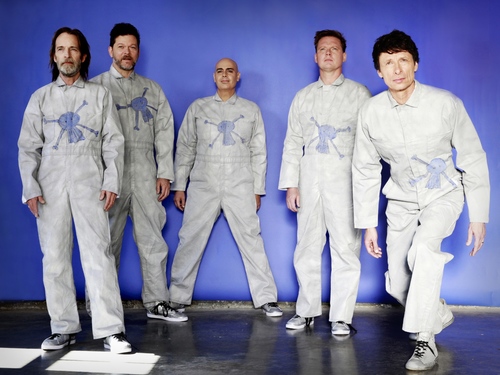 Steve Taylor & The Danielson Foil
Reveal video for “Nonchalant” featuring loads of dogs!
Wow To the Deadness EP
Released on CD/LP via Sounds Familyre on 22 April6-Track Collaboration Between STEVE TAYLOR and DANIELSON
Produced By Steve Albini
Ahead of the release of the EP Wow To The Deadness, Steve Taylor & The Danielson Foil (a collaboration between Daniel Smith from Danielson and Steve Taylor) reveal the video for “Nonchalant”. The clip was directed by Jeremy Gonzales and features loads of really cute dogs riding along with the band in a car. “Nonchalant” has the same coiled intensity as The National, but feels more wounded, more restless.

Steve Albini rarely names records he’s worked on when people ask him what he’s been listening to, but when he sat down with Buddyhead for the fifth installment of Buddyhead Radio in July, he made an exception. “Dan Smith (Danielson/The Danielson Famile) just put together this ad hoc band with a singer named Steve Taylor,” he said. “And they play this really rowdy punk rock. And that record is fucked-up and great. I didn’t expect that kind of music out of them, and I certainly didn’t expect it to be as awesome as it was. I was expecting it to be charming or interesting, but it ended up being really raucous and really great.”

“Really raucous and really great” is the perfect shorthand for Steve Taylor & the Danielson Foil, a whipcrack 6-song EP recorded by Albini that applies scalding punk rage to delightfully cockeyed song structures, making for a half-dozen songs that don’t have many clear musical parallels. It’s Magazine covering the Godspell soundtrack or the Buzzcocks trading verses with the Free Design

The collaboration grew out of a U.S. tour Taylor and his band, the Perfect Foil (Jimmy Abegg, Peter Furler and John Mark Painter), took with Danielson in support of Taylor’s acclaimed 2014 album Goliath. Though both Taylor and Smith had spent most of their careers questioning musical norms – Taylor through sharp social satire, Smith through dizzyingly inventive song structures – a musical alliance between the two of them was hardly a foregone conclusion. But they had such immediate, easy chemistry that they reached out to Albini, with whom both Taylor and Smith had worked before, to set aside studio time when the tour swung through Chicago. The result is an EP that combines both of their sensibilities for a batch of songs full of hairpin musical left turns and sharp, deftly-observed lyrics.

More than anything, Steve Taylor & the Danielson Foil is the sound of two acts scrapping every rule of songwriting and rewriting the document according to their own impulses. Every time you think you’ve got its sound pinned down, it shape-shifts again, transforming into something entirely new, fantastically confounding, and utterly irresistible. It is, to paraphrase Steve Albini, really raucous and really, really great.