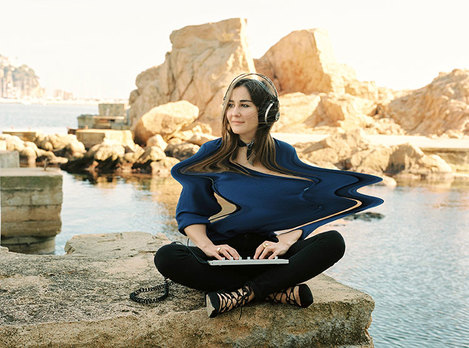 “I’ve done everything myself. Every sound is mine, every synthesizer, every melody, every beat,” says Isabel Fernández Reviriego, who is releasing Adieu Or Die under her pseudonym,Aries via K Records/La Castanya on 1 April 2016. It isn’t simply notable anymore that someone is their own band, overdubbing over and over, but in the case of Aries, we have music that is so thickly and sturdily constructed, through layer upon meticulous layer, it becomes not just a marvel of sound, but one of craft. This is bedroom pop that has broken down the genre’s confines and insecurities with the maturity that allows it to walk confidently down the stairs and right out the front door, leaving the entire house behind.
Aries’ music is densely melodic, like echoes of the American west coast in the 1960s coming through the Spanish radio waves. On “En el Océano” her voice twists around itself like a stick of Twizzlers licorice. Amidst all the synthesizers, drum machines, buzzes and whirrs, the most prominent, playful, melancholy, important piece pasting everything together is Reviriego’s voice, light and dancing in circles around every song. On Adieu Or Die, she says, “someone disintegrates, while the world disintegrates around him or her.” But there is something beautiful in the way things fall apart, in the way that things die. Aries lives in that nook, comfortable and warm.
“Aries is here to cure you with the will of song…[she] warms listeners throughout.” -Tiny Mix Tapes