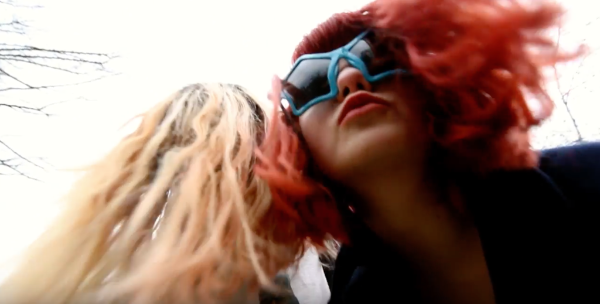 With their new album ‘The Big Fit’ set for release next Friday April 8th via their own label Chap Stereo,Skating Polly let rip with a new video for the record’s heaviest track, “Hey Sweet”.

‘The Big Fit’ is streaming in full over at She Shreds now.  Kelli has also just been confirmed to star in new US TV show ‘When The Street Lights Go On’.

Last year, Skating Polly toured the UK for the first time, supporting Babes in Toyland on their reunion shows. During the last show of the tour in Glasgow, Kelli “did a Dave Grohl” when she tripped, dislocating her knee & tearing a ligament. Unfazed & in true rock’n’roll spirit, she continued the rest of the set sitting down.

Produced by Kliph Scurlock (Gruff Rhys, Flaming Lips), The Big Fit is scheduled for UK release on April 8th and US release on March 25, 2016, through Chap Stereo.