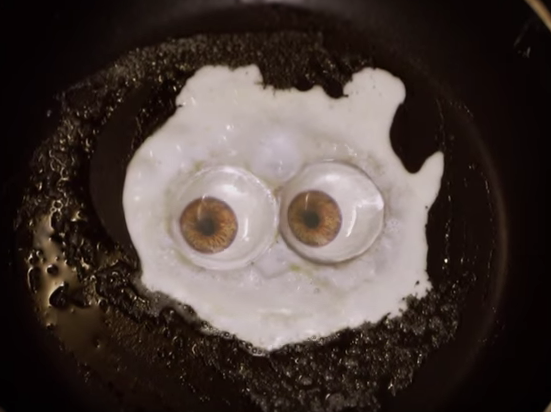 Band Currently on Tour in the UK and Europe

To celebrate the release Palehound’s UK release of Dry Food on Heavenly Recordings today (4 March), the band has released a new music video for “Molly”. Directed by Lara Jean Gallagher and Brian Kinkley, the video follows the surreal (and slightly tragic) story of EggGuy, and the woman who eventually eats him.

“EggGuy was concocted during a late morning brunch mishap,” explains the directing duo. “We wanted to explore the frailty of life, what it means to have consciousness, and how much we could care about a pair of eyeballs. “Molly” has just the right amount of weird sweetness to make this all seem really fun.”

Fronted by 21-year-old songwriter and  guitar mastermind, Ellen Kempner, Palehound released their debut album, Dry Food, the US last summer, landing them on “Best Of 2015” lists with NPR, VICE’s Noisey, Paste Magazine, The Observer, Consequence Of Sound, The Boston Globe, The Austin Chronicle + many more.

Since then the band has toured virtually non-stop with Torres, Bully, Mitski, PWRBTTM and a variety of other bands, developing a ferocious live set in the process. They are currently in the midst of their first tour of the UK and Europe. They were also featured on Marc Riley’s Radio 6 show on 1 March, and have already garnered praise from the likes of Clash, Loud & Quiet, The Line of Best Fit and London In Stereo:

“Ellen is already the toast of the American underground, with her DIY approach set against some biting lyrics and kick-ass garage rock thrills.”
– Clash

“Opener ‘Molly”s wiry, abrasive riffs sound like they’re being played by St. Vincent herself, while ‘Cinnamon’ is a jazz-lite take on Mac DeMarco’s woozy sound”
– Album of the Month, London In Stereo

“It might not make it to the half hour mark, but through the record’s infectious hooks, downbeat rhythms, racing refrains, acoustic twangs, and everything in between, Dry Food enchants.”
–  The Line of Best Fit

Revered for her raw, rattling live show, be sure to catch Palehound in a city near you!