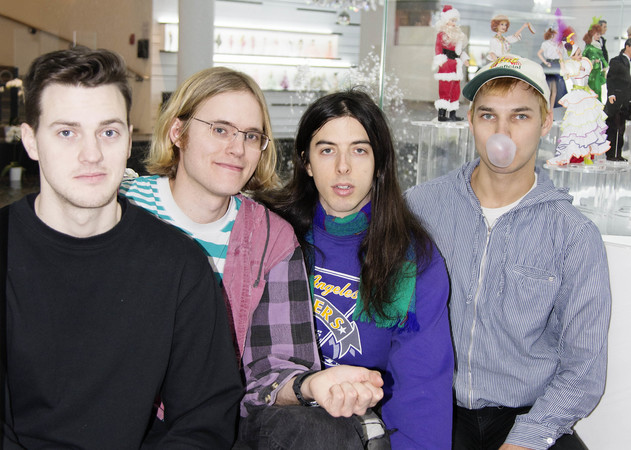 One of the most hotly tipped bands to emerge from this year’s SXSW sweaty music industry circus, Nap Eyes allured with laid-back charm and irresistible melodies. Heading across the Atlantic from their native Nova Scotia, Canada for their first ever European tour in May, they’ll be playing several UK dates including shows at The Great Escape in Brighton and an evening at London’s Moth Club. Along for the ride will be Irish guitar virtuoso Cian Nugent.
Nap Eyes‘ critically acclaimed new album Thought Rock Fish Scale was released last month via Paradise of Bachelors.
NME premiered a live video for the album track “Mixer” and announced the European tour saying; “You don’t wanna miss them: purveyors of beatific, sun-drenched US roadtrip tunes, they’re a laid-back, summery affair at first glance. Dig deeper though and there’s much to get lost in… Subtle and intricate, they’re an impressive outfit, and in my mind they already rival those other great up-n-coming summer kingpinsWhitney when it comes to the good time vibes.”
The live video for “Mixer” was filmed at Lee’s Palace in Toronto, ON Canada on 25 September 2015 during the second of a two-night stand opening for The Constantines.
Recorded live to tape, with no overdubs, on the North Shore of Nova Scotia, Nap Eyes’ quietly contemplative sophomore record Thought Rock Fish Scale refines and elaborates their debut, offering an airier, more spacious second chapter, a bracing blast of bright oceanic sunshine after the moonlit alleys of their debut Whine of the Mystic. But the briny, cold Atlantic roils beneath these exquisite, literate guitar pop songs, posing uneasy riddles about friendship, faith, mortality, and self-doubt.
For fans of The Only Ones/England’s Glory, The Modern Lovers, The Clean, The Verlaines, The Go-Betweens, Bedhead, and all things Lou Reed.
Listen to tracks:
Album version of “MIXER”
“Roll It”
“Lion in Chains“
Praise for Thought Rock Fish Scale:

“One of the most enjoyable and insightful albums released this year so far.” Drowned in Sound 8/10

“Thought Rock Fish Scale is an album brimming with passion and protest. It finds confidence in humility, power in relaxation. Its lethargy feels like an act of defiance against the hyper-speed pace of modern life.” Pitchfork