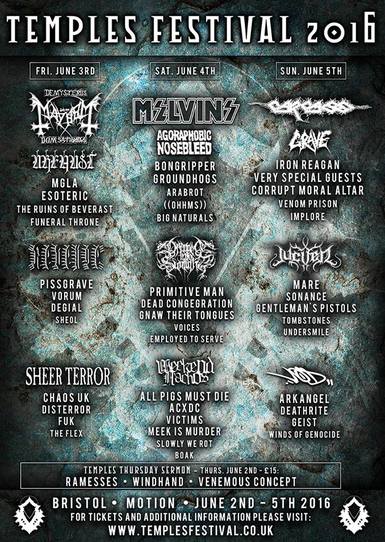 MAYHEM ANNOUNCED AS FINAL HEADLINER FOR TEMPLES FESTIVAL 2016;
AGORAPHOBIC NOSEBLEED AMONGST FINAL ROLL CALL OF ARTISTS ANNOUNCED
At long last, Temples Festival are truly honoured to reveal their third and final 2016 headliner…performing their seminal debut studio album De Mysteriis Dom Sathanas in it’s entirety for the first ever time on UK soil – please welcome The True Mayhem to Temples Festival.
In celebration of this landmark performance, Mayhem will be a joined by the likes of Urfaust, MGLA, The Ruins of Beveast, Esoteric, Revenge, Chaos UK, Pissgrave and many more what is set to be be one of the most aggressive days in the history of the festival.
That’s not all, it’s with the utmost pride with which Temples can finally announce Agoraphobic Nosebleed as their very special guests on Saturday June 4th, performing for the first ever time in the UK to an audience who have been nothing short of ravenous in requesting they take the stage at Temples 2016.
According to an announcement on the festival facebook page, 2016 also sees a number of improvements underway at Motion to further enhance the Patron’s experience; including a newly designed site layout, increased number of caterers, bespoke ale and cider, an expanded outdoor terrace, a dedicated merchandise room and generally speaking – the same attention to detail that Temples Festival as been praised for each year.
Sadly, both Acid King and Inter Arma have been forced to cancel their planned 2016 European appearances so neither band will perform at this year’s event. However, in their absence, Temples welcomes an additional three artists: Grave, The FLEX & Winds of Genocide.
Without further ado, here is the full and final run down of the acts to perform at Temples Festival 2016:-
ACxDC
AGORAPHOBIC NOSEBLEED
ALL PIGS MUST DIE
ARABROT
ARKANGEL
BIG NATURALS
BOAK
BONGRIPPER
CARCASS – Sunday Night Headliner
CHAOS UK
CORRUPT MORAL ALTAR
DEAD CONGREGATION
DEATHRITE
DEGIAL
DISTERROR
DRAGGED INTO SUNLIGHT
EMPLOYED TO SERVE
ESOTERIC
THE FLEX
FUK
FUNERAL THRONE
GENTLEMAN’S PISTOLS
GNAW THEIR TONGUES
GRAVE
GROUNDHOGS
IMPLORE
IRON REAGAN
JUCIFER
MAYHEM – Friday Night Headliner
MARE (Hydra Head)
MEEK IS MURDER
(the) MELVINS – Saturday Night Headliner
MGLA
((OHHMS))
PISSGRAVE
PRIMITIVE MAN
RAMESSES
REVENGE
THE RUINS OF BEVERAST
SHEER TERROR
SHEOL
SLOWLY WE ROT
SONANCE
TOMBSTONES
UNDERSMILE
URFAUST
VENOMOUS CONCEPT
VENOM PRISON
VICTIMS
VISION OF DISORDER
VOICES
VORUM
WEEKEND NACHOS
WINDHAND
WINDS OF GENOCIDE
Limited weekend tickets and Day Tickets are available from www.templesfestival.co.uk/tickets
It’s time, and Temples are expecting you…….
www.templesfestival.co.uk