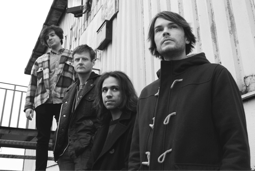 ”A five-minute swim in deep pools of brilliant noise.’ – Stereogum

‘London indie rock outfit Lull have only been a band for a little over a year, but their sound feels like something from decades prior. Their guitar-heavy, shoegaze sounds harken back to the fuzzed out daze of the ’90s’ – Consequence of Sound

Lull are set to release their new single ‘Cicada/Rainer’ via Plastic Fish Records on the 29th of February 2016.
This North London based-band formed in early 2014 by Jon, Toby, Filipe and Simon. With obvious comparisons to bands like Smashing Pumpkins, My Bloody Valentine and Slowdive, these guys are now in the midst of making a name for themselves.
Lull have already managed to engage in an impressive amount of both national and international set lists, reaching as far as Portugal.
After the success of their debut self-titled EP and the single ‘Cursed/Rusk’ the band are now set to drop their newest track online. With previous support from the likes of DIY magazine, NME and Tom Ravenscroft (BBC 6 Music), Lull’s blurred out, shoegaze-sound has proven to be wanted in the industry.

‘Cicada/Rainer’ is a heavy but pleasant affair, created by mellow drums and melancholy guitars. The smooth voice of lead singer Jon melts together perfectly with the backing vocals and creates a sound that would suit any after-after party.