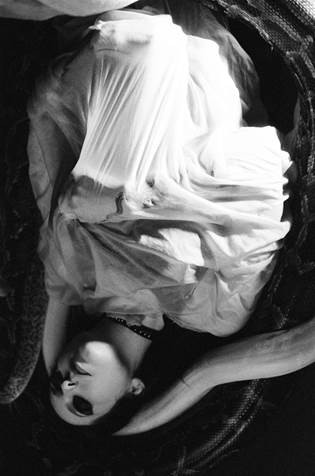 Chelsea Wolfe – Hypnos/Flame 7”
April 1st – Sargent House
Both photos by Muted Fawn
“’Hypnos’ begins menacing and air-tight but opens a window as it unspools. It’s as if the song itself is a liberating act of admission, arriving at its end with hope, some peace, and a space to breathe.” – PITCHFORK
“‘Hypnos’ is a love song with a Nosferatu just beginning to bear down on it…The song’s spare, shrouded acoustic balladry projects an unwinnable battle for love, or at least the appearance of it” – THE FADER
“Ms. Wolfe’s newly-released single, ‘Hypnos’ is not really metal, in so far as it features no loud guitars, no screaming, and no drums, and, oh yeah, is really pretty to boot. At the same time, though, “Hypnos” is, like most of Wolfe’s music, just about as metal as metal gets.” – METALSUCKS
“When musicians have this intensity in them, they often get to it sooner and stay put. Ms. Wolfe sounds like she’s using it by choice, not disposition; she can use different kinds of darkness as color or tincture.” – NEW YORK TIMES