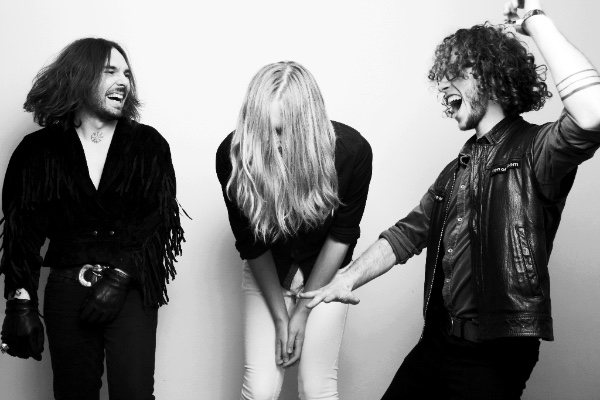 “Excellent and highly recommended.”
The Sludgelord

Formed in London in 2012 out of the expatriated ashes of French psychedelic rock band Soul Manifest, Bright Curse is a band that requires little introduction to anyone that has kept a close ear to the underground in recent years.

This May, the trio – featuring guitar player and vocalist Romain Daut, drummer Zacharie Mizzi and newest member Max Ternebring on bass – will follow up on their 2013 self-titled EP with the release of their full-length debut, Before The Shore, on HeviSike Records. Another rising star and staple of the subterranean/heavy-psychedelic set that has been making a noteworthy name for itself of late with releases from Dead Feathers, Prophets Of Saturn and Elevators To The Grateful Sky.

Recorded and produced by the band with J.B Pilon at Rock Of London Studios and mastered by Jaime Gomez Arellano at Orgone Studios, Before The Shore dives headfirst into the deep and darkened sea of brooding rock ‘n’ roll. Still riffing epic spectrums of dark and light but trading in the extended jams and out-and-out sounds of space rock, doom and metal found on their Bright Curse EP, for a more measured, and ultimately stunning approach. An approach that brings with it the hypnotic soul of David Gilmour-esque guitar solos, blustering Iommi riffs and stirringly effective Deep Purple key sections. All of which pull Bright Curse up through the surface at a rate of knots and out into the open waters of contemporary rock ‘n’ roll greats such as Graveyard, Kadavar and Colour Haze.

Having played live with the likes of Earthless, Naam, Mars Red Sky and Pentagram at festivals such Glad Stone Fest (France), Up In Smoke Fest (Switzerland) and more recently Desertfest (London), Bright Curse hit the road next month as part of a co-op tour with France’s Space Fisters (see dates below) ahead of the release of Before The Shore on 13th May 2016 through HeviSike.