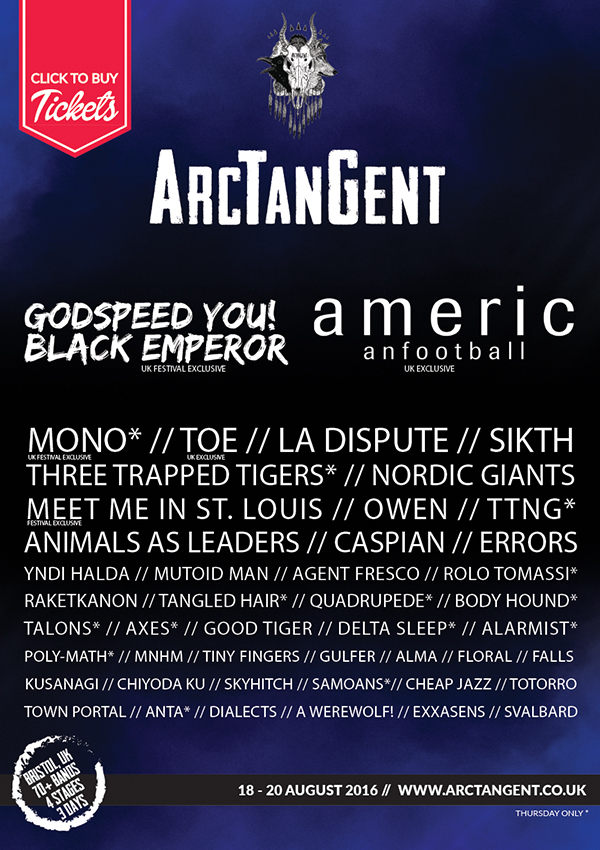 The 4th year of ArcTanGent Festival will see Godspeed You! Black Emperor join the already announced American Football, MONO, Toe, La Dispute, Sikth, Three Trapped Tigers and Meet Me in St. Louis. Organiser James Scarlett says “Godspeed headlining ArcTanGent is going to be incredible. We’re giving them a two hour set and their full production which includes some awesome visuals. The ATG “Arc Stage” is already a magical setting for post-rock & math-rock fans but this will take it up another level for sure!” Tickets are on sale now fromwww.arctangent.co.uk/tickets.

Canada’s post-rock titans Godspeed You! Black Emperor are in their 22nd year as a band and continue to grow their cult following across the globe. Last year’s “Asunder, Sweet and Other Distress” album was met by huge critical acclaim and was summed up by Pitchfork as “Godspeed to its core, moving from thin drones to Wagnerian pomp and circumstance and back again… nothing else out there sounds quite like them.”