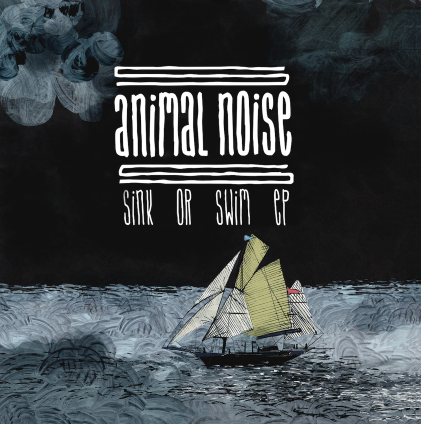 When Animal Noise self-released their debut album ‘Run Loose’ in 2012, they quickly went from playing in their rehearsal studio, an old cowshed on bass player Birdy’s farm, to the stages of Bestival & T in The Park.
Through extensive support from BBC Suffolk’s Introducing show, Animal Noise caught the attention of BBC Radio 1, receiving airplay from Greg James, Huw Stephens, Sara Cox and Scott Mills. BBC 6 Music’s Tom Robinson was also a big fan, recording a session with the band for his show. This widespread national radio support and subsequent festival appearances have meant Animal Noise have built a large following across their home county of East Anglia, and now they’re looking to reach further afield.
Working with producer Tom Donovan, the band have been crafting songs to follow up 2012’s ‘Run Loose’. The first tracks to come from these sessions will be found on their Sink Or Swim EP which will be released on limited edition vinyl as part of Record Store Day.
The lead single ‘Sink Or Swim’ will be released on the 8th April, upfront of the EP on 15th April. The band describe the track as having “a bouncing staggered riff that flips from aggression to reflection. The song runs with a recurring theme of water and helplessness, relating to plaguing negative thoughts and anxieties about taking risks, a fear of jumping into the deep end of something new and different which scares a lot of people…”
The EP includes the tracks ‘Bag of Bones’ and ‘Alright’, which have already gained momentum through extensive BBC introducing support.
A compelling blend of strong melody and intricate structure, Animal Noise are as innovative as they are exciting.

“I really, really liked that, I want to see them live…”
Greg James, BBC Radio 1

“Baddow blew my socks off. It’s a wonderful piece of music, played from beginning to end with such fresh, ferocious energy”
Tom Robinson, BBC Radio 6 Music

“Animal Noise, a dynamic three piece, so much energy, and great tunes. One of the best bands I’ve seen in a long time. Pretty cool following too.”
Roland Gift, Fine Young Cannibals

The bands attention to detail extends to the cover artwork which depicts a boat staying afloat in stormy seas, a metaphor for the music industry perhaps? The band found a photograph at a local art fair and knew immediately it would form the basis for the cover for their EP. They approached local artist Lee Thomas to realise their vision.
Social Links:
Soundcloud:
https://soundcloud.com/animalnoise/sets/sink-or-swim-ep/s-KuXIz
Website:
www.animalnoise.co.uk