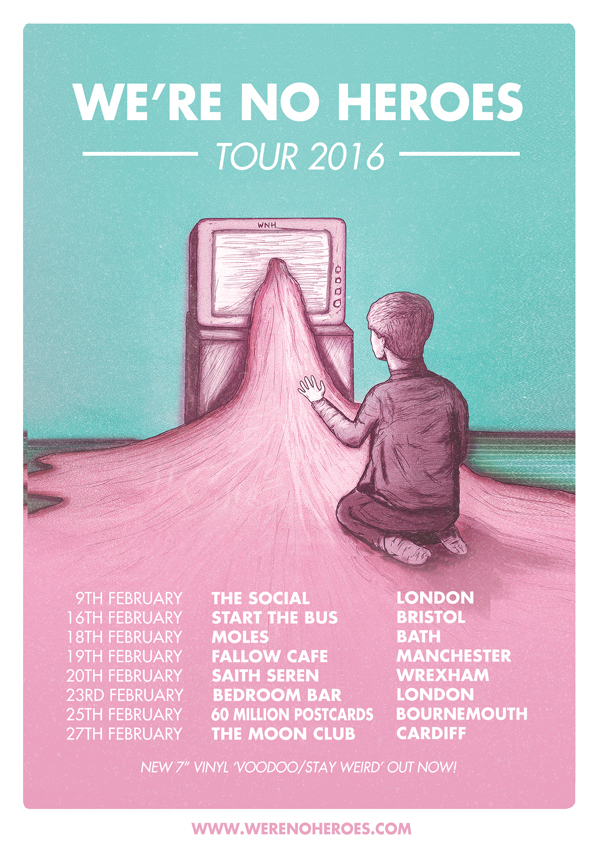 Cardiff three-piece We’re No Heroes will be touring the UK this February 2016 in support of their latest release and double a-side vinyl ‘Voodoo/Stay Weird’. The hotly tipped trio released their 7″ record last November via Spiral Icon Records, and included indie-funk infused single Stay Weird as well as indie-punk belter Voodoo.
Tour dates this February include:
The Social, London – Tuesday 9th February
Start The Bus, Bristol – Tuesday 16th February
Moles, Bath – Thursday 18th February
Fallow Café, Manchester – Friday 19th February
Saith Seren, Wrexham – Saturday 20th February
Bedroom Bar, London – Tuesday 23rd February
60 Million Postcards, Bournemouth – Thursday 25th February
The Moon Club, Cardiff – Saturday 27th February
The band combine raw, punk and indie energy, fusing this sound with grooves and melodies akin to soul act Jungle, creating their own unique and exciting sound. Stay Weird kicks off with a sharp guitar hook before developing into their groove-laden indie disco style. The song is an ode to feeling proud of being different and letting what’s unique about yourself grow instead of holding back. Voodoo is the edgier side of the single, but it’s origins come from a very personal place. Lyrically, it captures the uncertainty following a painful break up, and the need to move on into the unknown before being able to truly find happiness. While the theme may sound heavy duty, the upbeat guitar and driving vocals creates a truly accomplished party song.
The singles were accompanied with two videos created by Cardiff production company Storm & Shelter who have produced videos for the likes of BBC Horizons, Golden Fable, Novo Amor & Swami to name a few, these portray the theme and message of the tracks perfectly and have been watched by thousands around the globe in such a short space of time.
With Youtube and Soundcloud plays combined the band have reached well over 25,000 streams of the two singles and gained a number of supporters along the way; BBC Radio 1 (Huw Stephens), BBC 6 Music (Steve Lamacq), BBC Radio Wales (Adam Walton & Bethan Elfyn) and Amazing Radio (Shell Zenner).
Originally formed in a downtown studio space in Chicago, the band are Luke Llewellyn (drums/lead vocals), Tom Collins (vocals/guitar) & Michael Owen (bass/vocals). Having known each other since childhood, their close connection shows in everything they do, from their performances to their hands on approach to loyal fans, aka WNH Wolfpack.
We’re No Heroes have played alongside the likes ofPeace on their two Welsh dates of a UK tour, plus Public Service Broadcast, Catfish and the Bottlemen and Future Of The Left and have been busy recording new material set for release later this year.
www.werenoheroes.com
www.twitter.com/werenoheroes
www.facebook.com/werenoheroes
www.soundcloud.com/were-no-heroes