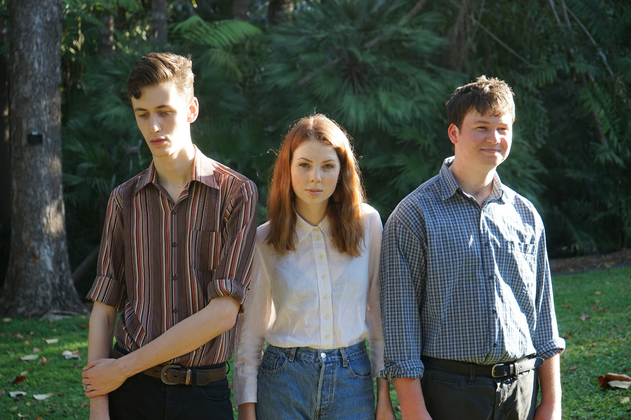 “Hints of Galaxie 500 and The Pastels abound, and…the feel of something Edwyn Collins might have wandered into back in his Postcard days.” NME

Aussie teen trio The Goon Sax share the title track from their forthcoming debut LP Up To Anything via Clash, who said that the album is: “Funny, charming, moving and totally addictive, hitting spots that other indie pop outfits simply can’t reach.”

Singer and guitarist Louis Forster says of the song “Up To Anything”
“Up To Anything is the second last song I wrote for the album of the same name. I remember sitting down on the couch in my living room, it was 2 in the afternoon, the middle of summer and I hadn’t changed out of my pyjamas yet. I was waiting for James to come over, and suddenly I was playing the riff, the rest of the song came very quickly after that. The lyrics were just a snapshot of my life, which at that time felt tiresome and slow. A few weeks later I showed it to the band, and it became the standard opener for our set.”

The Goon Sax are Louis Forster, James Harrison and Riley Jones, who are all 17-18 years old. They make pop music. They have refined tastes – they love the Pastels, Talking Heads, Galaxie 500, Bob Dylan and Arthur Russell. On Up To Anything they pull off ­the almost impossible, capturing the awkwardness, self-doubt and visceral excitement of teenage life, while still in the thick of actually living it.

The band formed at high school in 2013 when James and Louis began workshopping song ideas in James’ bedroom. Riley joined in early 2014, after a month of drum lessons, and the band played their first show a few months later.

Chapter signed The Goon Sax in 2015 on the strength of an unsolicited demo, the first time that has ever happened in the label’s history. Singles Sometimes Accidentally andBoyfriend have since been featured on the likes of Stereogum, NME, BBC 6Music andBrooklyn Vegan. They’ve gone on to play with the likes of US Girls, Twerps, Blank Realm and Crayon Fields and had a spot at Brisbane Laneway Festival in February.

The Goon Sax are already masters at pairing teen microdrama with pop sophistication – but clearly, Up To Anything is just the beginning!

The band will be touring the UK in September.