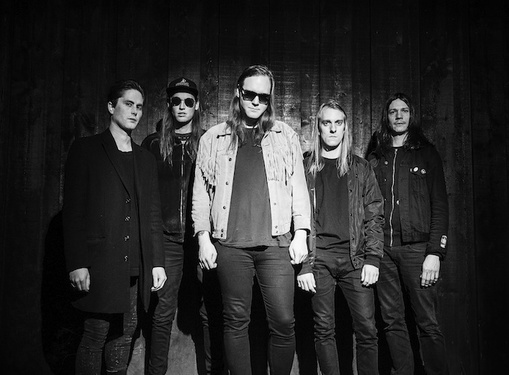 SOUTHERN LORD TO REISSUE OKKULTOKRATI’S SNAKEREIGNS AND NIGHT JERKSLPS
AHEAD OF NEW ALBUM
Norwegian mavericks Okkultokrati are reissuing their 2012 album Snakereigns and 2014’s Night Jerks LPs via Southern Lord in May (originally released via Fysisk Format). These releases shall precede their fourth full-length, which shall be recorded later this month, also to be released through Southern Lord.
Guitarist and songwriter Erik Svarte shares his thoughts on joining the ‘Lord family…“Southern Lord acts like Earth, Velvet Cacoon, Gore, Sunn O))) and Winter have played a big part in shaping our approach to music both personally and in Okkultokrati. To me, a band like Sunn O))) represents something contemporary and we recognize ourselves in that. I can’t think of a better home for our band and the new album we just finished writing.”
Okkultokrati make it their business to tear apart the rock’n’roll guidebook and pulp it in to vicious combat music for fans of punk, d-beat, black metal and generally anyone with a penchant for unsavoury anthems delivered with inimitable attitude. They have earned a ferocious reputation for syphoning elements of disparate genres in to their toxic, distorted brew, a trait that can be observed across the whole of the Black Hole Crew collective (encompassing Haust, Dark Times, Blood Suckers, Drugged SS and more). Once the sheer slamming force of their tunes has sunk in, the iconoclastic quintet have a tendency to pull the rug from under the whole contraption, sending their tracks tumbling in to experimental and industrial forays that further their capacity to ensnare the listener in their bear trap.
For a taste of their impact so far, here’s some videos…
Night Jerks from the album Night Jerks
Snakereigns and Invisible Ley (Live 2012) from the album Snakereigns
Snakereigns and Night Jerks reissues will be available on vinyl from May through Southern Lord, who will also be combining the two records on to one CD. Check back for more details regarding placing orders for these releases, and stay tuned for further news on their upcoming full length.
“They basically do for dark metal what Pissed Jeans did for hardcore and grunge – take it outside and give it a stiff beating, then bring it back inside the bar and get it blind drunk. The alternation of claustrophobically dark, synth-driven grave music and full-throttle, punk-infused metal gives the album more dynamic range than most modern punk and electronica records can dream of.” – THE SKINNY
“…a furious combination of hardcore, crust, black metal, sludge, d-beat, and more with one thing in common, a united drive towards the most hateful music on the planet.” – NOISEY
“Okkultokrati are on their own trip here and based upon the path so far, Night Jerks is merely the latest step on the trail to infinitely stranger climes…” – THE SLEEPING SHAMAN
www.facebook.com/okkultokrati
okkultokrati.bandcamp.com
okkultokrati.blogspot.com
www.southernlord.com
www.southernlord.bandcamp.com
www.facebook.com/SLadmin
www.twitter.com/twatterlord