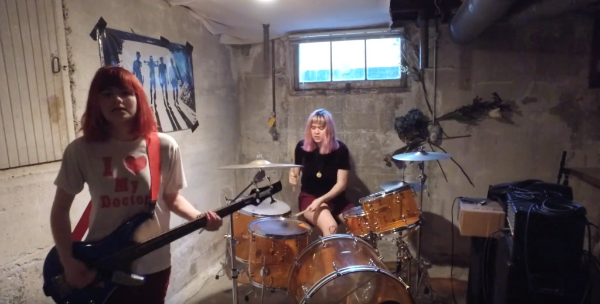 Oklahoma stepsister duo Skating Polly have shared the second single from their forthcoming album“The Big Fit” which is set for release on April 8th via Chap Stereo.

The new track “Perfume For Now” is a feisty snapshot of their sugar-laced raw & visceral punk and has been brought to life by Nickolas Rossi, director of the 2014 Elliott Smith documentary Heaven Adores You.

“I wrote Perfume For Now hoping to come up with an L7 anthem type chorus and a noisy basitar solo”explains Skating Polly’s 15 year old whirlwind, Kelli Mayo. “It’s about trusting someone with all your heart and then realizing they’re despicable and not worthy of your admiration.”

Last year, Peyton Bighorse and Kelli Mayo toured the UK for the first time, supporting Babes in Toyland on their reunion shows. During the last show of the tour in Glasgow, Kelli “did a Dave Grohl” when she tripped, dislocating her knee & tearing a ligament. Unfazed & in true rock’n’roll spirit, she continued the rest of the set sitting down.

Produced by Kliph Scurlock (Gruff Rhys, Flaming Lips), The Big Fit is scheduled for UK release on April 8th and US release on March 25, 2016, through Chap Stereo.