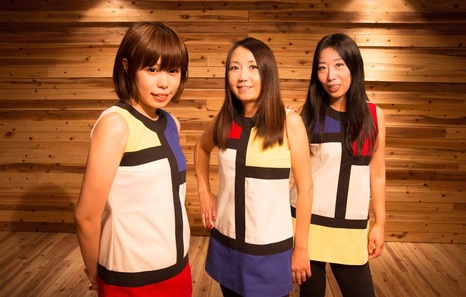 SHONEN KNIFE
Reveal first track “Jump In To A New World”
From New Album Adventure
Due Out On Damnably on 1 April
UK/IRL TOUR DATES IN APRIL AND MAY (see below)
Japanese cult pop punk trio Shonen Knife celebrate their 35th Anniversary this year with a brand new album Adventure (out on 1 April via Damnably). They will be hitting the road for their most extensive UK and Eire tour in April, which includes a slot at the Stewart Lee curated All Tomorrow’s Parties Festival.
The first single “Jump In To A New World” premiered at Stereogum today, who said: “The first single off their upcoming album Adventure, “Jump Into The New World,” carves out its place amongst their extensive catalog, continuing their mastery of the happiest punk you’ll ever hear.”
Formed in Osaka by guitarist and chief songwriter Naoko in 1981, Japan’s Shonen Knife rose from humble DIY beginnings crafting their own idiosyncratic songs, and fashioning their own brightly coloured outfits, to sharing a stage with Nirvana on their Nevermind tour, trailblazing a path for women in music and inspiring legions of bands.
For this, their 19th album, original drummer Atsuko returns to play bass, joining Naoko (vocals + guitar) and relative newcomer Risa on drums, whilst some bass parts were provided by regular member Ritsuko(who is on maternity leave) and Naru, who became an official member from a support band.
Adventure sees the band delving deeper in to the 70s rock leanings that they explored on their last album Overdrive. As Naoko explains; “passing through the 70s, the music genre which was born as rock’n’roll developed to ROCK. This album is like that.” Musical references include Thin Lizzy, Motorhead and Deep Purple, but of course, this is Shonen Knife, so there is still an excitable pop element to the music. There are catchy hooks and 60s girl-group inspired harmonies along the way but the album is firmly rooted in 70s Rock.
Opener “Jump into the New World” is one of the poppiest tracks on the record, about new drummer Risa moving to Osaka from her hometown of Oita. Whereas, in “Rock’n’Roll” t-shirt, the 70s rock groove really kicks in, with heavy, chugging power chords and fun lyrics about every rocker’s favourite item of clothing. “Hawaii” is one of the mellower songs on the album and inevitably includes surf sounds. “Tasmanian Devil” was written after Shonen Knife played a festival in Tasmania, Australia last year. It is about the native animals, the Tasmanian Devils and is the first Shonen Knife song to feature duel lead vocals, which are shared between Naoko and Atsuko.
The album continues the Shonen Knife tradition of singing about food. “Wasabi” is a Motorhead-esque ode to Japan’s favourite condiment and “Green Tangerine” is about Kabosu tangerines which are tiny and green and used like a lemon, they are a local specialty of Risa’s hometown Oita. “Cotton Candy Clouds” is based on one of Naoko’s favourite motifs, cotton candy. It plays homage to 70s era Beatles with a colourful arrangement and layered vocal harmonies.
Despite their 35 years as a band, Shonen Knife still sound as fresh and vital as they ever did. They have maintained their rightful place in the ever-changing indie rock scene as one of the most influential and beloved of Japanese rock exports. They recorded sessions for John Peel and appeared on MTV’s ‘Beavis and Butthead’. In 2010 the band played Matt Groening’s curated ATP (and play the Stewart Lee curated festival in 2016), and have toured the UK, Europe, North America, China & Taiwan.
Live, they are tight with machine-precision, punching out fast, highly exciting sets of Punk, Pop, Rock & Metal hits, all coated with their own distinctively quirky and life-affirming charm. As they fast approach their biggest European tour to date, Shonen Knife’s joy and invention shows no sign of fading. As Naoko says, “Let’s Rock!”
“Rocks like Motorhead designed by Hanna-Barbara” Uncut
“Ultimately, without using superlatives, Shonen Knife should be set up for life as ambassadors for live music.” Clash Music
“There are two types of people: those who enjoy thrashy Japanese girl- punk, and those who have something wrong with them.” The Independent On Sunday
“Shonen Knife’s gloriously infectious buzzsaw rock & roll remains firmly in place to charm the pants off even the most of cynical and hardened of churls.” The Quietus
“The Osaka Ramones, you must concede, still have it.” BBC Music
Full Tour Dates:
April
14 Manchester – Ruby Lounge
15 ATP 2.00 – Stewart Lee
16 Birmingham – Oobleck
17 London – Dingwalls
19 Falmouth – Princess Pavilion
20 Southampton – Joiners
21 Brighton – The Haunt
22 Guildford – Boileroom
23 Norwich – Arts Centre
24 Colchester – Arts Centre
26 Leeds – Brudenell
27 Gateshead – Sage 2
28 Edinburgh – Summerhall
29 Glasgow – CCA
30 Dublin – Whelans
May
1 Belfast – Cathedral Quarter Arts Festival
2 Cork – Crane Lane
4 Liverpool – Arts  Club
5 Nottingham – Maze
6 Leicester – Musician
7 Bedford – Esquires
8 Bristol – Fleece