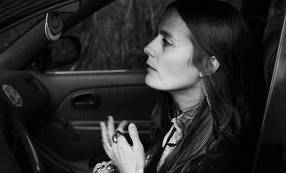 “There’s a tranquillity to Frøkedal’s latest offering that belies the lyrical gravitas, and the result
is a track that’s haunting and beautiful in equal measure.” – The Line Of Best Fit

Following on from a couple of busy London performances in 2015 and the announcement of her first full length record ‘Hold On Dreamer’, Frøkedal takes to the road with her band “Familien” in the first half of 2016. Dates include London and several regional UK performances, as well as a tour of Germany and a spot on Norway’s renowned Øya Festival. Full dates below…

Stripping arrangements to their bare bones, Frøkedal’s taste for sparse production carries through to the live performance – her band Familien(Norwegian for Family) fill the stage with delicate strings, percussion and harmonies that cocoon Frøkedal’s electric guitar and timeless sounding songs. It’s all about beauty in simplicity and great musicianship.

Having fronted successful Norwegian outfits Harrys Gym and Grammy-nominated I Was A King (who count Sufjan Stevens, Robyn Hitchcock and Norman Blake among past collaborators), Frøkedal approached her solo descent differently, almost defiantly. “Almost everything I’d done in the past I tried to avoid,” she says. “Harrys Gym had a huge pop sound with lots of instruments, so the new songs had to be simple. I wanted a stripped-down sound that was still dynamic.

“Because everyone has a computer these days, there’s no limit to how many times you can multi-track. I’m sick of that. Big, busy songs don’t touch me emotionally anymore. I hoped to go the other way – to remove as much as I could and be left with a beating heart.”

The end result is ‘Hold On Dreamer’ – a worthy successor to Frøkedal’s debut EP of September, ‘I See You’, which was promptly praised by the likes of BBC Radio 6music, The Line of Best Fit, Clash, The 405 and Notion Magazine.

New single ‘Kid’ is out now – the first taste of Frøkedal’s forthcoming debut LP, slated for release on February 26 via Propeller Recordings. Stream the track via Spotify // iTunes //