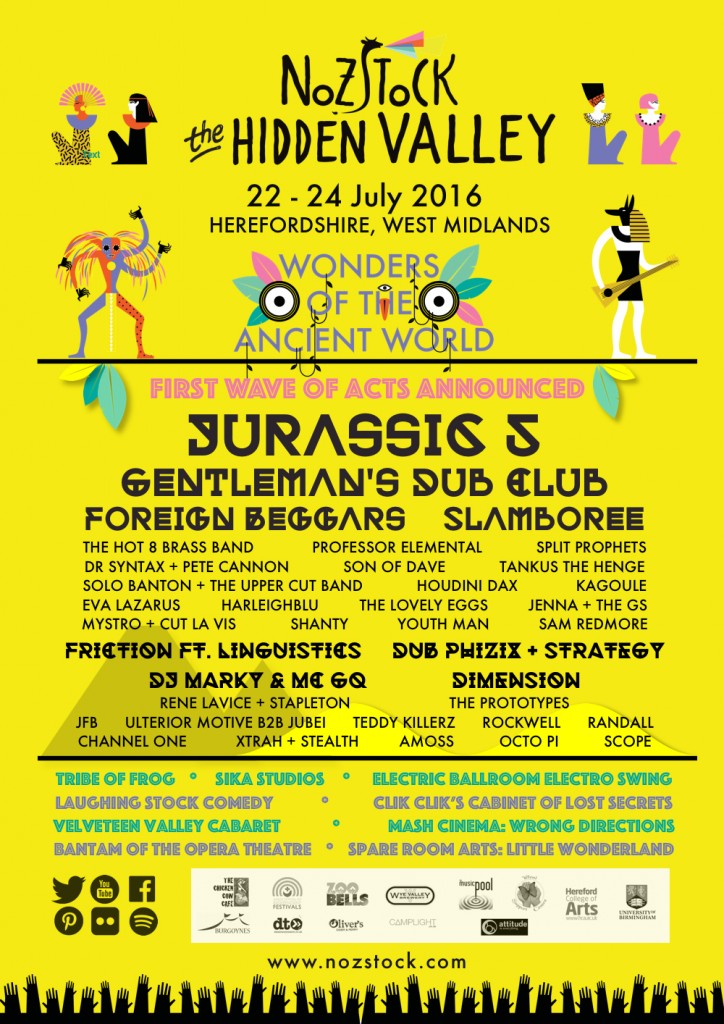 Headliners include Jurassic 5, Gentleman’s Dub Club and Foreign Beggars with more to be announced

Reaching its 18th year in summer 2016, Nozstock is nestled in rolling hills of a beautiful working farm in the heart of the Herefordshire countryside. The immensely welcoming and independent event has evolved from 50 friends gathered at the inaugural gathering to flourishing into an intimate musical odyssey, one of the UK’s longest running festivals. Curated by the father and daughter duo of Noz and Ella and a huge extended family who work across the entire festival, there’s a unique charm and energy to Nozstock unlike anything else in the country.

Nozstock is a wonderful playground for everyone, from seasoned festival goers to newbies setting out for their very first time. Special emphasis is placed on creating a wonderland of interactive adventures and performances for big and small kids of every ages, with families and children especially welcome. And as ever, there’s a new fancy dress theme to inspire everyone, which this year is Wonders of the Ancient World – think across the wilder side of history for creative ideas.

Nozstock features a vibrant spectrum of children’s entertainment this summer. The festival embraces a whole family festival experience from beginning to end, and the Children’s Space is a friendly welcoming environment for both parents and little ones alike. All are welcome to get creative, be amazed by wondrous stories, sculptures and entertainment, or roll their sleeves up for some physical fun. All events and activities are free of charge in the Children’s Space across the whole weekend, as the festival strongly believe families shouldn’t foot the bill for festival fun. There’s even a bottle warming service!

Some of the amazing activities on offer include: make super kites with Let’s Go Fly a Kite; there’s pillar painting action with What did the Romans ever do for us?; Walk Like An Egyptian is all about making Egyptian headdresses and learning hieroglyphics; The Hanging Gardens Of Nozstock is time to decorate and plant pots; Aztecs Sundials is lots of fun with old-school time-keeping; 3D is the theme for creating Mayan masks and much more at Marvelous Mayan Masks; create new clothing with Bandhani Tie Dye; Fabulous Festival Fashion creates new looks from old clothes and jewellery; make and decorate Greek pots and spend time creating amazing Magic Lanterns; Creative Corner is the place to be for anyone wanting to paint, draw and write; Family Yoga is great for all the family and Story Time is the place to be for transportation to another world. Workshops are carried out by the lovely crew from Spare Rooms Arts, designed so art can be enjoyed and experienced anywhere, anytime, by anyone at Nozstock.

There will be walkabout interactive performances all weekend and incredible surprises around every corner. Let your eyes be boggled by the mind-bending performance artists who weave, wind, twizzle and sizzle their way through the weekend creating pure pleasure and astonishment. Expect plenty of surprises on site from stilt walkers, jugglers, unicyclists and more at Ballz Out Circus Troupe; one on one interactive action at Knaive Theatre presents Dreamspeakers; hours of paint-based mayhem from Sunken Circus/Groove Yard Collective present Organised Mess; Sunken Circus in Birdmaids involve both children and adults alike; and Lee Partridge presents A Commeida Del’Arte Promenade features enchanting stories.

This year Nozstock favourite The Bantam of the Opera will once again be filled with a weekend of strange occurrences, enthralling theatre, jaw-dropping circus, side-splitting poetry, mesmerizing puppetry and more moments of magic than you can shake a stick at. Then everyone can head in the Wrong Directions Cinetent to be entertained, amused, confused and inspired. Open throughout the whole weekend, the Wrong Directions Cinetent is an audio-visual sanctuary for the weary traveller to re-energise minds with informative and provocative documentaries and be immersed in cinema classics. Here is the time to reset everyone’s cultural compasses with an array of quality shorts and be hypnotised by an eclectic selection of experimental works.

Nozstock also features all manner of crazy entertainment throughout the day across the site and the Nozstock Village. This includes the Yeleni Healing Zone for a massage and unwind and the Chill Welfare for people to, well, chill out. Folk Jam features musicians strumming, singing, blowing and plucking unplugged, The Chicken Cow Café has lots of delicious homemade

treats, there is a shopping boulevard with lots of lovely things on offer and don’t forget Nozstock’s spectacular finishing fireworks flourish on the Sunday.

Nozstock thanks its supporters and partners: