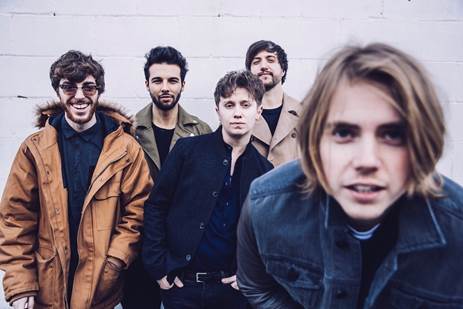 PLUS UK TOUR SOLD OUT

Having established themselves as trailblazers of the UK rock scene with their debut top 10 album last year, Nothing But Thieves are set to take their sound global in 2016 with a US tour supporting Mutemath this February, which includes three sold out headline dates, plus their first US TV performance on Jimmy Kimmel. The band will then return home for another sold-out UK tour, including a date at London’s Shepherds Bush Empire.

To kick things off today the band release the video for their new single “If I Get High”, taken from their killer Top 10 debut, the visual see’s RJ Mitte, who came to be known as “Walt Jr.” thanks to his turn on Breaking Bad. The video treads familiar territory for Mitte, as he navigates another broken familial relationship whilst seeking an escape from it. Dark, deep, depressive; It matches the band’s calls for escape that echo throughout the track.

Previous singles from ‘Nothing But Thieves’ have gained multiple playlist additions across Radio X, Kerrang! and BBC Radio 1 – where the band also bagged Hottest Record In The World and Track Of The Day accolades, as well as playing as part of their Live Lounge Month in September. Nothing But Thieves have spent this year touring across the world, playing a multitude of international festivals, including Summersonic in Japan and the main support slot at Muse’s Rock In Rome show to a sold out stadium of over 35,000 fans, as well as Reading and Leeds Festivals. 2015 was just the beginning and 2016 will see the young Southend band continue to carve their way as leaders of the new UK rock scene.