IDestroy reveal the video for debut single ‘Vanity Loves Me’ 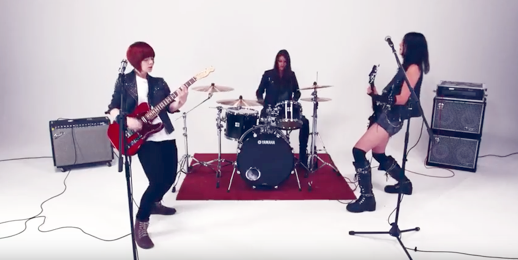 Bristol all-girl three-piece IDestroy have just unveiled the video for their raucous debut single ‘Vanity Loves Me’, the title track from their debut EP, which is released on February 26th and is available for pre-order here and on iTunes. The video premiered on Punktasticwho describe the track as a “…short, sharp slab of garage-rock glory”.

The video is a tongue in cheek testament to their DIY approach and captures the band’s more humorous side whilst showing their punk rock attitude with the infectiously bratty track.

Perfectly formed at two minutes and eighteen seconds, ‘Vanity Loves Me’ is a sizzling introduction to IDestroy. With nods to the punk-edged sounds of Sleater Kinney and The Stooges, the track features huge guitar riffs, prowling basslines and insistent drums, topped off with gloriously feisty vocals from singer/guitarist Bec Jevons.

Since forming earlier in the year, the youthful trio – completed by Becky Baldwin (bass/backing vocals) and Jenn Haneef (drums) – have built up a loyal following in their hometown, playing regularly in small but packed-out venues, and creating a genuine buzz around their local scene.

The leather-clad, pop-punkers have not been afraid to take their catchy grrrl power to bigger stages either, playing the likes of Anfi Rock Sound festival in Spain and supporting Cherie Currie (The Runaways) at Bristol Bierkeller.

2016 sees them hit the ground running with a number of upcoming dates across the country including a very special EP launch party on February 26th at the Hydra Book Shop, Bristol.