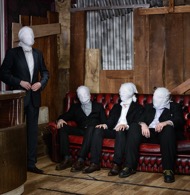 Originally formed by two frustrated drummers, Godzilla Black released their eponymous debut in 2010. Catching the attention of Ginger Wildheart, frontman John Cormack, was invited to contribute vocals to Ginger’s Mutation project alongside members of Napalm Death, Cardiacs and The Fall, which was later released on Mike Patton’s Ipecac Records.

2013 saw the release of the band’s second album “The Great Terror” on Triple Jump Records. The album featured contributions from drumming legend and Godzilla Black fan Dale Crover (Melvins and one time Nirvana sticksman) and Berlin based vocalist Suki Osman.

Summer 2014 saw a change in personnel within the band as drummer Matt Reid, (formerly of Leeds band Hawk Eyes) and bassist Dan Frazer joined to appear on upcoming album ‘Press The Flesh’. Recorded by Dan and mixed by the band, the album will be released on 1st April via Quisling Records. The video for ‘The other other white meat’ is the first taste of what to expect from the album. The band state:

‘This was one of the first riffs we started jamming with this lineup of the band. It’s our version of a good time rock ’n’ roll song – swagger and Jagger! It’s about everything oral – hygiene, sex and eating. We filmed the video in a dining room in Peckham. Like everything we do, it was incredibly glamorous.’
Watch the video here –

‘Press The Flesh’ continues the band’s obsession with experimenting beyond the boundaries of the rock and hardcore. Inspired by artists such as John Zorn, Lightning Bolt, Mike Patton and the Boredoms they embrace all things heavy with nods to surf, proto-funk and noise-rock, which has led to them supporting the likes of Italian art-rock legends ZU in 2015 and appearing at Manchester’s Carefully Planned Festival.

John Cormack comments; ‘This is probably the most straight up rock record that we will ever make. It took us until our third album but we finally made a record that we can go out and play live with just four people – it’s almost like we’re a real band! Don’t worry though, there’s still a bit of messing about with synths and overdubs so it’s still a Godzilla Black record.’

Godzilla Black on ‘Press The Flesh’ are:

‘They jump across several genres as if they don’t exist, pirouette on the grave of common sense, and partake in gratuitous self indulgence and yet still manage to sound for the most part, fucking awesome’ – The Line of Best Fit

‘Despite the slight theatrics, Godzilla Black largely remain a rock band; a rock band that’s here to devour you whole, but without the courtesy to wait until you are actually looking.’ – Echoes & Dust