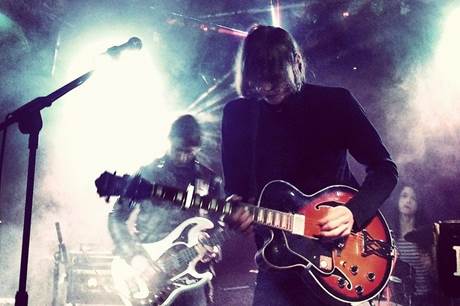 Through phaser-heavy production, storming drums and warped keys, ‘The Ticket That Exploded’ captures the bleak reality of growing up in modern Britain. It’s a record that captures a time and a place, portraying brute honesty and melancholy through a talent for songwriting that many artists chase. Fuzzed-up chords ring out seemingly at their own leisure and organs drone on beneath them as frontman Tom Hayes’ frustration and despair pierces through.

Dead Rabbits were one of the earlier Fuzz Club signings and took the closing spot of the first Reverb Conspiracy compilation, where the mantra-like lyric “It’s only just begun” seemed the perfect summary of both Fuzz Club and Dead Rabbits at the time.

The album’s centrepiece, ‘It’s All in Her Head’, has never lost its place in the band’s live set, and with good reason. It stretches its way across uncontained six minutes with a hypnotically repetitious organ melody crafted by keyboardist Paul Seymour, and Link Wray-influenced raw guitars, which create a surreal backdrop to Hayes’ despairing vocals.

‘The Ticket that Exploded’ is available for pre-order on vinyl in standard and deluxe edition. Standard edition (500 copies) is 180g heavy black vinyl, and deluxe edition (100 copies) is 180g transparent red vinyl with gatefold cover, embossed logo on the back cover, hand numbering and a printed inner sleeve featuring an illustration of the band by The Underground Youth’s Olya Dyer. Deluxe editions are available exclusively in the Fuzz Club online store. Also available on CD and cassette.

Based in East London, Fuzz Club has gained a reputation for surfacing the best emerging talent from Europe and beyond, and releasing them on high quality, limited edition vinyl pressings, alongside a roster of the best known names in the underground scene including The Black Angels, Alan Vega, Dead Skeletons, A Place to Bury Strangers, The Telescopes, Singapore Sling, The Underground Youth and Sonic Jesus. Today Fuzz Club has around 20 artists and over 40 releases.

Fuzz Club has also announced a new monthly event, Under The Arches, starting 5th March at London Fields Brewhouse. The all-day event combines a record label market featuring a handpicked selection of top like-minded labels from the UK, US and Europe (Captured Tracks, Fire Records, Rocket Recordings, Sonic Cathedral, Hands in the Dark and many many more) alongside an impressive line-up of bands (The Underground Youth, Younghusband and more) street food and craft beer. It’s an opportunity to be part of something genuinely exciting in independent music.

April and beyond will see the release of volume four of The Reverb Conspiracy compilation, further releases from the The Third Sound, Sonic Jesus and a new Live Session vinyl and video series using only analogue equipment to capture authentic back-to-basics, one-take recordings from bands including:

This is a label dedicated to quality experimental rock and roll, influenced by shoegaze, electronica, noise, garage, blues, folk and psychedelia, whose relentless release schedule and determined outlook is sure to make 2016 not only a big year for them, but for the entire genre.

All releases can be purchased and pre-ordered at http://fuzzclub.com/

Tickets for ‘Under The Arches’, March 5th, can be ordered at http://www.seetickets.com/event/under-the-arches/london-fields-brewery/945287

For news and shop –

Eades Share New Track “Reno” Out via Heist Or Hit