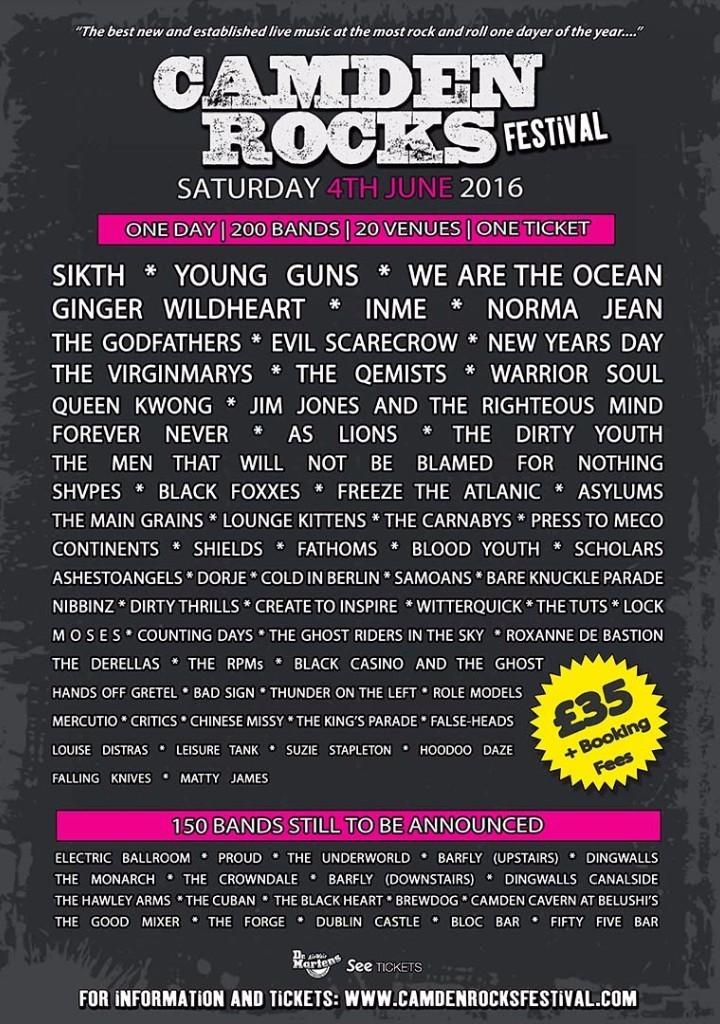 CAMDEN ROCKS FESTIVAL CONFIRMED TO RETURN FOR THE 5TH YEAR ON JUNE 4TH 2016
MANY MORE BANDS TO BE ANNOUNCED
Returning for its fifth year, this coming Saturday June 4th sees the welcome return of the Camden Rocks Festival; over two-hundred high-energy bands performing in multiple venues across Camden Town. It’s a one-mile strut of thrilling music that takes place in over twenty different venues and runs the full gauntlet of rock n’roll, from punk to indie to metal to classic rock, the future of rock rubbing shoulders with the past and the present, all exploding together in one glorious cacophony of chaos and noise.
Organizer Chris McCormack says: “It’s great to see punters and bands from all genres come together to celebrate the best of live music. The energy across the day is electric and does Camden’s rock n’roll heritage proud!”

“Camden Rocks is an awesome festival to be a part of,” says frontman Mikee Goodman. “I played it in another band last year and thought the day had a great buzz. Really looking forward to playing to SikTh fans in an intimate London venue!”

On top of that, Wildhearts frontman Ginger reveals that he will be playing three completely different sets in three different venues. “Should be a hoot,” he laughs.

The following acts are also confirmed to perform, with many more to be announced including headliners and smaller bands:

Every year prior has sold-out and 2016 looks set to be no different!

£35 tickets are now available from the link below subject to booking / transaction fees
www.camdenrocksfestival.com

Over 200 bands for £35 playing in over twenty different venues.