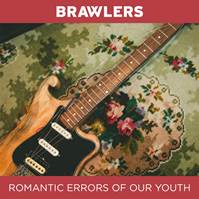 Brawlers re-release their debut album ROMANTIC ERRORS OF OUR YOUTH on vinyl for the first time, to celebrate an incredible year touring UK, Europe and Australia with the likes of Lower Than Atlantis, Set It Off, Real Friends, Milk Teeth

Out 8th April via Alcopop! Records

“Hands down the best new live band in Britain, Brawlers are making the kind of impact on the gig circuit Gallows had back in 2007” Drowned in Sound

“These lads are on to big things, no doubt about it. “ Rock Sound

“Brawlers have a sense of humour, they’re loud, fun and will make you want to dance” London in Stereo

Brawlers are road-hungry, booze laden punk rockers – and after a blistering 2015 that saw them release a critically acclaimed debut album, tour with Lower Than Atlantis, Milk Teeth, Allusondrugs, and Max Raptor across UK, Europe and Australia – the band have decided to re-release their debut album (originally out on CD and Digital last year) on 12” vinyl.

The vinyl will be released on limited edition Reign in Blood Red and Black Splatter and comes with the complete original record in full, plus three special acoustic versions of three key track.

The punk rockers – whose knack for short and spiky social commentary has seen them added to Kerrang’s list of the “20 Hottest Band’s In The World Right Now’, and lauded across print press along with being playlisted on Radio X and Kerrang – are just weeks away from premiering the first cuts from album two.

Singer Harry George Johns said “We’re so excited about this vinyl release – we’re all audiophiles – but what’s really incredible is that after a year of solid touring, taking us all around Europe and even to Australia – so many people were asking for the album on vinyl, and we’re really proud to finally meet that demand. Plus I’m stoked on the extra tracks too, I think they show a really interesting side to the band.”

With the first tracks from the new record due to drop in the next few weeks, this is the end of an exhausting cycle for ‘Romantic Errors of Our Youth’ – and the beginning of something ever more exciting for Brawlers…