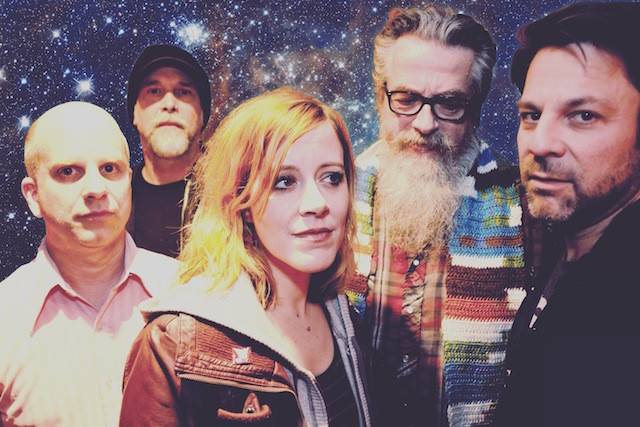 WUSSY
Announce new album Forever Sounds
Due out on 4 March via Damnably(Europe)/Shake It (US) LP/CD/DL
The Single “Dropping Houses” is available 29 January
Tour Dates:

April 28 Manchester – The Castle
April 30 Cardiff – The Full Moon
May 1 London – Walpurgis Nacht Festival @ The Windmill, brixton
May 3 Leicester – The Musician
May 5 Brighton –The Hope & Ruin
(more to be announced)
Forever Sounds is the brand new album from Cincinnati’s Wussy, due for release on 4 March via Damnably. It is the band’s sixth full-length and their second to be released in the UK, after the 2012 compilation Buckeye and 2014’s Attica!. Forever Sounds finds Wussy crafting some of their most raw and melodic material to date, exploring such themes as hauntings, false prophets, aliens and The Big Lebowski, all blanketed inside layers of noise. Combining the raw energy of Nuggets-era psych with fuzzy 90’s dream pop, the effect is equally jagged and serene, a blend of singable Americana and “arena-drone”.
The first single is “Dropping Houses“, which was premiered at SPIN who said: “The LP opens with the Wizard of Oz-referencing “Dropping Houses,” crawling along a nasty riff amid Lisa Walker’s atmospheric vocals comparing a breakup to literal poison (“Spent so long sucking on a snake bite / Trying to keep the venom from entering the bloodstream”). In the hands of less adept acts, these parts might be oil and water; but America’s best songwriting band might now be among its best soundscaping ones.”
Lisa Walker from Wussy goes in to more detail about the song:
“Dropping Houses is a culmination of sounds we’ve been attempting to harness for a few years now. Our dorky dual fandom of 90’s shoegaze + tom petty has fully surfaced and become a really singable wall of noise.
As for the lyrics: growing up in tornado alley makes the Wizard of Oz all the more fun and terrifying. I used to imagine what it would be like to fly in a house inside a giant storm.. Wondering what ordinary objects would fly by my windows and turn into monsters. Anyway, there’s a moment in your life when you have to stop being afraid of the witch, the storm, whatever it is.  And this song celebrates that.
Cincinnati may be a far cry from Oz, but it has a magic all its own. Plus, it’s weird as fuck here. Instead of yellow brick roads, there are bizarro tiles laid in a few streets proclaiming “resurrection of the dead on planet Jupiter”. Sign me up, I guess.”
Comprising the songwriting talents of Chuck Cleaver (formerly of Ass Ponys) and Lisa Walker, Wussy have evolved over the last decade to become forerunners of New Midwestern Psychedelia. The band has been heralded by critics for both their songwriting and varied sonic palette, often drawing comparisons to admitted heroes, Television, Velvet Underground, Crazy Horse and Yo La Tengo.
Following the band’s first US TV appearance (CBS) in 2014 and increased critical acclaim from the likes of Pitchfork and Spin, they headed to the studio to record their sixth full-length Forever Sounds with renewed vigour and a new engineering team. John Hoffman and Jerri Queen (both of Vacation), along with John Curley (Afghan Whigs), at Curley’s Ultrasuede Studios enabled the band to take more chances and create the sound they had always been reaching for.
Although the new album is a natural progression from 2012’s Strawberry and 2014’s Attica!, the cleaner production of previous records has been set aside for a move towards shoegaze and drone rock sounds. While their pop sensibilities remain intact, the mix and instrumentation are more reminiscent of the band’s noise-heavy live shows. There are quiet moments, as with all Wussy records; but the overarching sonic theme is a wash of heavy psychedelia. Lyrically, the album deals with themes of the unknown, the archaic and the occult.
Wussy were once described by former Homestead Records boss (and fan) Ken Katkin like this: “In Lisa Walker, Chuck had joined forces with the next generation’s contender for poet laureate of middle-America’s working class.” Although musically the band create a wash of catchy fuzzed out drone rock, it is the duo’s songwriting abilities that really shine. Forever Sounds is aptly titled. The album’s ten tracks are full of hope, determination, heartbreak, deception, aliens, the supernatural, the everyday, friendship, love and second chances. This is a record to be savoured and cherished. Forever.
“Chuck Cleaver and Lisa Walker find a novel way to attack subjects as tried and tested as flings and break-ups.” The Guardian
“Recalling a roll call of adventurous boy/girl-styled indie bands: Yo La Tengo, Handsome Family, X, Wussy draws on plenty of yin/yang sexual and existential tension, a charmingly shambling, rough-hewn sound, and an army of alternately droning and jangling guitars on their sharpest outing yet.” Uncut
“One of the best indie-rock albums of the year. If this is happiness, it’s not a conventional portrait. But this one features both a signature sound and a healthy dose of Middle American weirdness, so it’ll do.”  – NPR SONG OF THE DAY
LINKS:
Order: https://theorchard.lnk.to/ForeverSounds
Damnably – http://www.damnably.com/portfolio/wussy-forever-sounds/
Wussy Facebook – https://www.facebook.com/wussymusic?fref=ts
Wussy Twitter – https://twitter.com/wussymusic
Wussy – http://www.wussy.org/