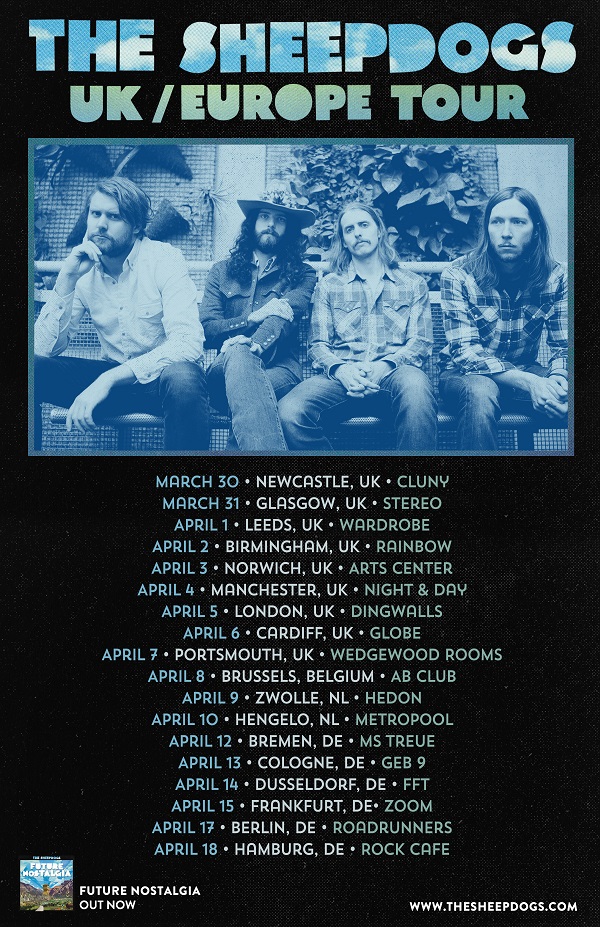 Canadian rockers The Sheepdogs have today announced details for an 18 date UK and European headline tour set to run through March and April 2016. The tour – which takes in nine UK shows including London Dingwalls on April 5 – comes close on the tail of a successful support stint for The Sheepdogs opening up for The Temperance Movement across their UK January tour. Tickets are onsale from 9am GMT on January 26 2016.

The Sheepdogs’ much-praised fifth album, Future Nostalgia is out now via Dine Alone Records (City and Colour, BRONCHO). Mixed by Vance Powell (Jack White) in Nashville, the collection brings the band back to their 70s-rock inspired roots and is the follow up to their self-titled, award-winning album in 2012 (produced by The Black Keys’ Patrick Carney). Produced by lead vocalist and songwriter Ewan Currie alongside engineer Matt Ross-Spang (engineer at Memphis’ Sun Studios) Future Nostalgia was recorded in the quiet and idyllic setting of Stony Lake, Ontario, a conscientious choice by the band to ensure they kept all distractions at bay and the recording process as natural as possible. The band, comprised of Currie, Ryan Gullen (bass/vox), Sam Corbett (drums/vox) and Shamus Currie (keys/horns/vox) set up camp for several weeks in a cottage in the remote country where they trucked in equipment to build a studio in order to record their latest effort.  “We worked from morning ‘til night, but we kept it loose, had a real good time, and came away with a rock n’ roll record” says Currie.

Formed in Saskatoon, The Sheepdogs have followed in the footsteps of Canadian rock legends including Neil Young, The Band and The Guess Who with a bold take on classic guitar rock and polished retro sound. The band came into the national spotlight in 2011 as the first unsigned band to appear on the cover of Rolling Stone, which led to a performance on Late Night with Jimmy Fallon and a special appearance on Project Runway. A live favourite, The Sheepdogs have played at numerous festivals and headlined tours across North America, including performances at Bonnaroo, Coachella, Lollapalooza, as well as opening for acts like Kings of Leon, and sharing the stage with Jason Sudeikis, Will Forte and Justin Long at Stones Fest. For their last self-titled LP, The Sheepdogs worked with Patrick Carney of The Black Keys to produce the collection, which debuted at No. 1 on the Canadian Top 200 SoundScan Chart, and garnered three No. 1 singles. The band has also won four JUNO awards, and been nominated for seven over their impressive career.