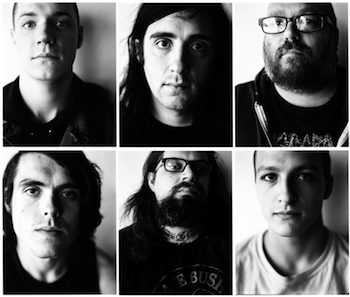 Neurot Recordings is very pleased to announce a full-length collaborative debut between apocalyptic doom duo, The Body, and grindcore/harsh noise sculptors, Full Of Hell, this March. Fittingly titled One Day You Will Ache Like I Ache, this offering boasts eight scathing hymns along with two bonus tracks.

Both acts are unstoppable tour machines and joined forces for a massive 2015 North American live takeover. Amidst the chaos, the two groups found time to record together at Machines With Magnets in Providence, Rhode Island. The session eventually culminated into One Day You Will Ache Like I Ache, which is ultimately an audio reflection of their surroundings and their inability to cope therein.

One Day You Will Ache Like I Ache Track Listing:
1. One Day You Will Ache Like I Ache
2. Fleshworks
3. The Butcher
4. Gehorwilt
5. World of Hope And No Pain
6. Himmel Und Hölle
7. Bottled Urn
8. The Little Death
9. Cain *
10. Abel *
*Bonus tracks
Forged in 1999 in Little Rock, Arkansas and now based in Portland, Oregon, The Body has been massively prolific since their inception with a sound that is uncategorized and unmatched. The duo writes and acts as one, a deafening wail against a failing species.
Full Of Hell was formed in 2009 in Ocean City, Maryland. In similar ethos, the band has remained relentlessly productive both on stage and in recorded form and has continued to challenge themselves, channeling resonances from across the spectrum of extreme music into a nihilistic wall of oppressive sound.
Through their own respective recordings, both The Body and Full of Hell are internationally-revered as forward-thinking entities of harsh music, delivering their audio torment through incredibly intense and often unorthodox methods. The Body’s 2010-released All The Waters Of The Earth Turn To Blood sophomore LP stands among the band’s high points and remains on of the most groundbreaking (and frightening) albums in recent times. Their subsequent releases, including several LPs and have continued to expand upon this seminal release. Similarly, Full Of Hell rapidly became a favourite amongst hardcore, grind, death and noise metal fans upon their formation with an incredibly energetic and destructive live attack. Their 2013-released Rudiments Of Mutilation sophomore LP solidified them as one of the most damaging new acts going, and since its detonation, the band’s intensity and hunger for experimentation continues to magnify.
Both acts are proven collaborators, relishing the results of collective efforts to create life-numbing constellations of distortion and depravity. The two members of The Body have joined forces with arcane producer The Haxan Cloak (Bobby Krlic) for the I Shall Die Here long player, Louisiana’s darkest sludge troupe Thou for Released From Love and You, Whom I Have Always Hated, as well as Nothing Passes with Braveyoung and a myriad of splits with artists as diverse and detesting as Australia’s Whitehorse, Japan’s Vampillia, Rhode Island’s Sandworm and New Jersey’s Krieg taking their virulent, insidious influence to unsuspecting destinations both stateside and abroad.
Full Of Hell made a huge impression on the ears of fans and those previously unfamiliar with the band with 2014’s two-part alliance with internationally feared noisemonger Merzbow, which resulted in the Full Of Hell & Merzbow LP and the subsequent Sister Fawn EP. Their discography is littered with noise-sodden demos and splits that wrench Full Of Hell into fresh dimensions of heaviness and extremity, and their constant live actions never cease to stun.
Neurot Recordings will release One Day You Will Ache Like I Ache on March 25th, 2016 with preorder bundles available via the label store.
http://www.facebook.com/pages/the-body/334047229514
http://www.fullofhell.com
https://www.facebook.com/fullofhell
http://www.neurotrecordings.com/
http//www.facebook.com/neurotrecordings