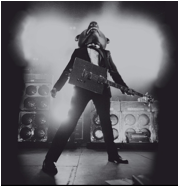 “The most important big-heads to come out of Sweden’s music scene, like, ever.” – Noisey

“Swedish grindcore-cum-stereo selector trio Teddybears is like an aural

Even more impressively than their industry recognition may be Teddybears ability to constantly push themselves as artists and continue to create ground breaking music. Their new album ‘Rock On’ is a work of art in its own right, each song takes a unique stance and they cross genre effortlessly. Once again proving their experiences and inspirations are much like their list of awards, long and impressive.

The lead single from the album is ‘The Best You Ever Had’ and features the infamous Gorilla Zoe. ‘The Best You Ever Had’ is a sonically accurate combination between Chemical Brothers Go, Daft Punk ‘Robot Rock’ andFatboy Slim ‘Push The Tempo’ showing that Teddybears have packaged yet another song into a unique piece of music. By sturdily building the foundations of their writing and producing careers, they’ve kept the freedom to do, write and produce what they want within the band, no matter how un-pop, un-obvious or unusual it may be…

Another highlight from the album features the dancehall phenomenon Bennie Man and is titled ‘Broken Heartbeat’. ‘Broken Heartbeat’ is a chilled summer track, taking inspiration from Ninja Tune’s Thundercat and Elephant Man, whilst packaging it into an easy-listening piece of music. Driven by a very catchy and cool bass-line, Beenie Man sprinkles this edgy yet semi-poppy track with his lyrical wizardry whilst managing to retain his signature style.

‘Marathon Man’ and is a typical example of two sides in one song interlaced between a pacey electro beat and a retro feel as well as slowing down into a trap/dubstep-like essence, all in the same track. Taking inspiration fromNinja Tune’s Thundercat and Elephant Man, Teddybears have packaged yet another song into a unique yet catchy piece of music.

Other gems from the album come in the form of ‘Ninja Man’, a perfect blend of original dance hall and modern day EDM. ‘RnR’ sounds like a throwback to the times when dubstep was at its peak and ‘Shades On’ is jam packed with highenergy reggae influences.

‘Rock On’ takes the listener on a new sonic journey and is OUT NOW via Polydor Sweden.